A retrospective look at 2010

Click here for a special seasonal greeting from everyone at the European Southern Observatory!

This year has heralded many new discoveries, facilitated by the ESO telescopes, including the thought-provoking find of a distant planetary system that resembles the Solar System. Using the HARPS spectrograph attached to ESO’s 3.6-metre telescope at La Silla in Chile, astronomers detected up to seven planets in orbit around a Sun-like star (eso1035). And an unusual interloper — an exoplanet that entered the Milky Way from another galaxy — was found by a European team of astronomers using the MPG/ESO 2.2-metre telescope at La Silla (eso1045).

In 2010 astronomers went far beyond just discovering such distant worlds. Amongst many new findings, astronomers used ESO’s Very Large Telescope at the Paranal Observatory in the Atacama Desert, Chile, to detect the first spectrum of an exoplanet (eso1002) directly and to analyse, for the first time, the atmosphere of a super-Earth (eso1047). Early in the next decade, astronomers should even be able to image rocky exoplanets, using the planned European Extremely Large Telescope (E-ELT).

Although 2010 was definitely the year of the exoplanets for ESO, other stellar news also made big waves in the media, including the discovery of hefty star currently weighing in at a whopping 265 solar masses and with a birthweight of as much as 320 times that of the Sun — perhaps not surprisingly, the most massive star known to date (eso1030).

This year, concluding the design phase, the E-ELT project went through a major review with an exceptionally positive outcome. Every aspect of this large project was scrutinised by an international panel of independent experts. The panel found that the E-ELT project was in excellent condition and is technically ready to enter the construction phase. On 26 April the ESO Council selected Cerro Armazones as the baseline site for the E-ELT (eso1018). This 3060-metre high peak is a neighbour of Cerro Paranal, the home of ESO’s Very Large Telescope, and only 20 kilometres away.

The Atacama Large Millimeter/submillimeter Array (ALMA), which ESO and its international partners are building on the 5000-metre-high Chajnantor plateau in the Atacama Desert in Chile, also made important strides forward this year. When completed in 2013, the 66 antennas that make up ALMA will work together as one telescope, with a resolving power of up to ten times greater than the Hubble Space Telescope, and this year alone, eight of the 66 antennas have been put in place.

Finally, while we have much to look forward to in the years ahead, we would like to mention two very successful projects which draw to a close this month: the Space Telescope European Co-ordinating Facility (ST-ECF), which since 1984 has been the European hub for the NASA/ESA Hubble Space Telescope at ESO, and the International Year of Astronomy 2009 (IYA2009) Secretariat, which was set up at ESO’s Headquarters in 2007 to coordinate activities around the world. ESO’s involvement in ESA/Hubble outreach and in many IYA2009 projects will however continue to thrive.

After looking back at the events of 2010, the only thing left for us to do is to wish you all a Happy New Year! 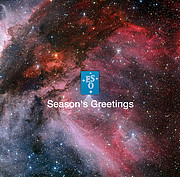 PR Image ann1095a
Our Season’s greetings e-card
Send us your comments!
Subscribe to receive news from ESO in your language
Accelerated by CDN77
Terms & Conditions