Three astronomers have been awarded the Viktor Ambartsumian International Prize 2010 for their outstanding contributions in the field of planetary systems and their host stars, in which observations with ESO telescopes have played a major role. The 2010 winners of the Prize are Professor Michel Mayor from the University of Geneva and two of his team members, Dr Garik Israelian from the Astrophysical Institute of Canary Islands (IAC) and Dr Nuno Santos from the Centro de Astrofísica da Universidade do Porto (CAUP), nominated by the Swiss Academy of Sciences.

The Viktor Ambartsumian International Prize was established by the President of Armenia in 2009 and is one of the most important awards in astronomy/astrophysics and related sciences. It is awarded to outstanding scientists from any country and nationality who make significant contributions to science. The Prize totals US$ 500 000 and will be awarded once every two years, starting in 2010.

The deadline for nominations for the prize was 18 March, and the International Steering Committee, chaired by the President of the Armenian National Academy of Sciences Professor Radik Martirosyan, received nominations from national academies of sciences, universities, observatories, and Nobel Prize winners for 14 outstanding scientists and teams from various countries. After a thorough study of the nominated works, as well as independent referees’ reports, the Committee had several discussions and finally selected Professor Mayor and his team as winners.

"I warmly congratulate Professor Mayor, Dr Israelian and Dr Santos for their well-deserved prize," says Professor Tim de Zeeuw, ESO’s Director General. “In Europe, Michel Mayor and his team have been leading the field of exoplanet research, in particular thanks to the use of the ESO facilities at La Silla and Paranal.”

In 1995, together with colleague Didier Queloz, Michel Mayor discovered 51 Pegasi b, the first exoplanet orbiting a Sun-like star, opening up the whole field of exoplanets. Today, almost 500 exoplanets are known, with many of them, in particular the smallest ones, discovered by Mayor’s team.

Their discovery uses precise measurements of the radial velocity of a star, which varies regularly due to the changing direction of the gravitational pull from an (unseen) exoplanet as it orbits the star.

Although their breakthrough discovery was made with the 193cm OHP telescope in the French Observatoire de Haute-Provence, Mayor and his team used telescopes on ESO grounds for most of their discoveries. First they used the 1.2-metre Swiss telescope at the ESO La Silla Observatory, in Chile. Soon, however, it became clear that much higher precision in radial velocities was needed, and this called for an extremely stable new instrument to be developed. In 1999, Michel Mayor led a consortium to build the High Accuracy Radial Velocity Planet Searcher (HARPS), which soon became the most successful low-mass exoplanet hunter in the world. HARPS was installed in 2003 on the refurbished ESO 3.6-metre telescope at La Silla and soon proved to be a unique instrument, reaching precisions of a few tens of centimetres per second.

The HARPS consortium was granted 100 observing nights per year during a 5-year period at the ESO 3.6-metre telescope to perform one of the most ambitious systematic searches for exoplanets so far implemented worldwide. To this end, the consortium repeatedly measures velocities of hundreds of stars that may harbour planetary systems.

Using HARPS, Mayor’s team discovered Gliese 581 d, the first exoplanet in a star’s habitable zone, as well as the lightest exoplanet ever detected around a normal star, Gliese 581 e. More recently, they have also found a potentially lava-covered world, whose density is similar to that of the Earth.

Despite the large number of discovered exoplanets, the formation of planetary systems is still far from understood. The amazing diversity of these systems is challenging. Over the last ten years, Mayor, Santos and Israelian have characterised the physical and chemical properties of stars with exoplanets. The results obtained by that team have had a strong impact on planet formation models.

The official award ceremony will take place on 18 September 2010 in Yerevan, Armenia. 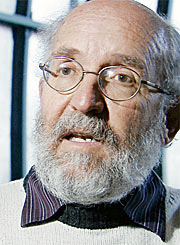