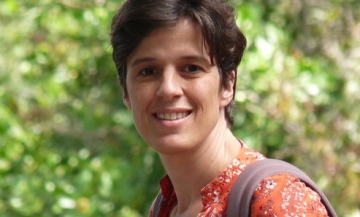 ESO is very pleased to introduce Francisca Kemper as the next European ALMA Programme Scientist. Ciska will join ESO on 1 November 2018, and will act as the primary contact between the ALMA Observatory, the ESO ALMA Support Centre and the European astronomical community with respect to the scientific capabilities, mission and exploitation of the ALMA facility.

Ciska got her PhD from the University of Amsterdam and subsequently held positions as a Spitzer Fellow at UCLA, assistant professor at the University of Virginia, and tenured lecturer at the University of Manchester, before moving to ASIAA (Academia Sinica, Institute of Astronomy and Astrophysics, Taiwan), in 2010 as research group leader. At ASIAA, she has acted as a strong proponent for the newly formed East Asian Observatory (including chairing the Time Allocation Committee of the James Clerk Maxwell Telescope), and held key roles, including PI of the ALMA Band 1 project, ALMA-Taiwan project manager, and national coordinator of SPICA-Taiwan. She is also the Secretary and a Steering Committee member of IAU Division H (Interstellar Matter and Local Universe), and a former member of the ALMA North American Scientific Advisory Committee. She continued her involvement as a key member and eventually as a main coordinator in the Mega-SAGE consortium, which conducted an infrared survey of the Magellanic Clouds using the Spitzer and Herschel Space Telescopes.

Ciska's main research interests centre on the formation and processing of dust in the interstellar medium. She led a Spitzer Legacy project (SAGE-Spec) which made an infrared spectroscopic inventory of the dust in a variety of Large Magellanic Cloud environments. She also has an extensive research track record in studying the properties of dust in AGN tori, starburst galaxies, the Milky Way interstellar medium, and the circumstellar environment of post- and pre-main sequence stars.