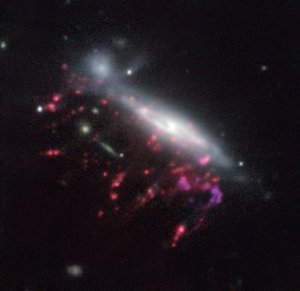 The ESO Large Programme, GAs Stripping Phenomena in galaxies (GASP) with Principal Investigator, B.Poggianti, has released deep MUSE 3D cubes observed in wide-field mode and natural seeing plus ancillary products from all of the observations taken during the first three semesters of the programme (Periods 96–98).

The scientific goal of the Large Programme is to study galaxies at z = 0.04–0.07 in different environments. The first half (57 galaxies) out of the final sample (114 galaxies) has now been released. For each target galaxy, the released data products are the reduced and combined MUSE 3D data cube, which can be queried and downloaded using the Phase 3 query form. Each 3D data cube is associated with an extracted 1D spectrum and H alpha and H beta emission-line flux maps, the Halpha 2D line-of-sight velocity field, the average star formation rate in four age bins, as well as luminosity-weighted stellar age and stellar mass density maps.

The data release comes with a detailed description of the Large Programme and comprehensive data documentation via this link.