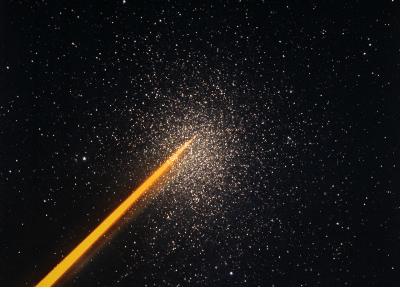 Recent developments of the Adaptive Optics Facility (AOF) project and the use of a laser comb for improved wavelength calibration have been announced.
The 4 Laser Guide Star Facility (4LGSF) achieved first light with the first of the laser guide star units on VLT UT4; see Announcement. The components of the AOF will be installed later this year and commissioned in 2015 and 2016.
The laser frequency comb installed on HARPS has completed an intense first commissioning phase. A velocity precision of better than 5 cm s-1 was obtained on a single laser comb exposure, improving to better than 2 cm s-1 on combining exposures. See Announcement for more details.