New Release of Images and Photometric Catalogues from VMC Survey 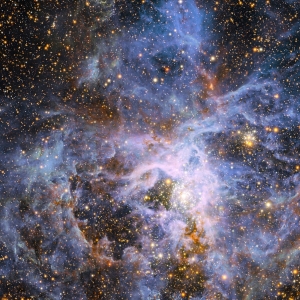 The VISTA Magellanic Survey (VMC) – one of the six public surveys current at the Visible and Infrared Survey Telescope for Astronomy (VISTA) – aims at determining the spatially resolved star formation history and 3D geometry of the Magellanic system. The VMC survey is designed to reach stars below the oldest main-sequence turn-off and the multi-epoch strategy enables determination of accurate Ks mean magnitudes for variable stars. This release contains five new images for VMC tiles, two re-processed tiles and band-merged and multi-epoch photometric catalogues, as well as catalogues of known Cepheid stars and eclipsing binaries.

The data release contains five new images for VMC tiles (LMC 5_5, 6_4, 8_3, and SMC 3_3, 3_5) and two re-processed tiles (LMC 6_6 and 8_8), covering 7.5 deg2 in the LMC and 3 deg2 in SMC. The catalogue data includes: i) the band-merged YJKs photometric catalogue, based on the deep co-added survey images of at least three epochs in YJ filters and twelve epochs in the Ks filter; ii) multi-epoch photometry in the YJKs-bands; iii) the catalogue of known LMC Cepheids; and iv) the catalogue of eclipsing binaries in the LMC. These latter two catalogues also contain data from optical bands, such as the periods and modes of pulsation for the Cepheids and the periods from optical catalogues (OGLE-III, EROS-2) for eclipsing binaries. These catalogues are extracted from the reduced images released through the Science Archive Facility in October 2014.

The new images are available from the Phase 3 image query form. The VMC catalogues are accessible from the catalogue facility query interface, each one accompanied by a comprehensive release description.