The fossil records of the mass assembly reside within the outer reaches of galaxies where dynamical timescales are long. Comparison with cosmological simulations shows that the stars in the outer halos are accreted, which are either stripped from satellite galaxies, in the form of streams and tidal tails, or deposited at large radii because of violent relaxation during massive mergers. Because of their non dissipative dynamics, the stars’ spatial distribution and velocities are very similar to those of the dark matter at similar radii (~100 kpc). In cosmological simulations, baryons (i.e. stars) and dark matter particles share the same 3D distribution in the most massive galaxies with the largest accretion fractions, see Figure 1. Given the hierarchical nature of the accretion history, multiple stellar components and complex kinematics are expected in the outer galaxy halos and cluster cores because of the long relaxation and dynamical times. The stellar halos and intra-cluster light (ICL) are still assembling at the present epoch. 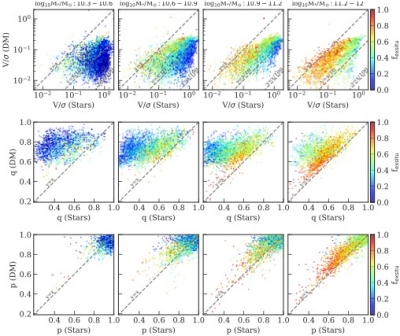 Figure 1: Local stellar vs. dark matter rotational support (V/σ, top panels) and intrinsic shape (axis ratios q and p, respectively in the middle and bottom panels) for all ETG simulated galaxies in 12 radial shells with r ϵ [1Re - 8Re]. Local measurements are colour coded according to the local ex-situ fraction fexsitu. Galaxies are divided into stellar mass bins as labelled at the top of the respective columns. The dashed diagonal lines show the relations y = x, y = x/10, and y = x/100. Rotation and shapes of stars and dark matter halo become similar with increasing fexsitu. From Pulsoni et al. (2021, A&A, 647, 95).

This PhD project focuses on the study of galaxies, from dwarfs to giants, out to the regions of stellar halos and the ICL, in the relatively nearby Hydra I cluster (50 Mpc distance), by using deep large-scale multi-band imaging (optical and infrared) and multi-objects as well as integral field spectroscopy. The main science goal is to quantitatively map the mass assembly in a galaxy cluster. This will be a benchmark study to compare the resulting observables with simulations’ predictions at all scales.

In addition to deep photometry, both in optical and near infrared, the kinematics of discrete tracers like globular clusters (GCs), planetary nebulae (PNe) and dwarf galaxies, both standard and ultra-diffuse (UDG), can be derived. This is fundamental to separate the gravitationally unbound intra-cluster (IC) components from the stellar halos, which are still gravitationally bound to the dominant cluster galaxies. Deep multi-slit spectroscopy data with FORS2 and VIMOS (already acquired by our collaboration) will provide a sample of discrete velocities from GCs and dwarf galaxies (see Fig. 2), to be compared with those of IC PNe. We will combine the line-of-sight (LOS) velocity distribution of all these independent tracers with the LOS velocities of UDGs and low surface brightness dwarfs to be measured from the recently approved Large Programme LEWIS ``Looking into the faintEst With muSe“  http://www.na.astro.it/LEWIS/Welcome.html).

The approach here is to use the properties of the entire sample of dynamical tracers to constraint the gravitational potential of the Hydra I cluster and to disentangle the origin of specific sample tracers rather than of each single individual component. 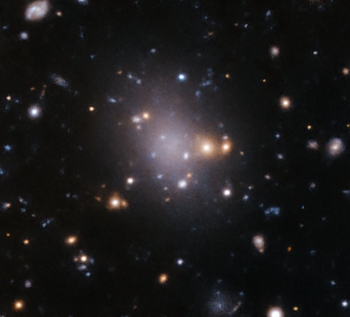