A Cosmic Rose With Many Names

This new image of the rose-coloured star forming region Messier 17 was captured by the Wide Field Imager on the MPG/ESO 2.2-metre telescope at ESO’s La Silla Observatory in Chile. It is one of the sharpest images showing the entire nebula and not only reveals its full size but also retains fine detail throughout the cosmic landscape of gas clouds, dust and newborn stars.

The nebula pictured here may have had more names bestowed upon it over the ages than any other object of its kind. Although officially known as Messier 17, its nicknames include: the Omega Nebula, the Swan Nebula, the Checkmark Nebula, the Horseshoe Nebula and — lest those with more of a more marine bent miss out — the Lobster Nebula.

Messier 17 is located about 5500 light-years from Earth near the plane of the Milky Way and in the constellation of Sagittarius (The Archer). The object spans a big section of the sky — its gas and dust clouds measure about 15 light-years across. This material is fueling the birth of new stars and the wide field of view of the new picture reveals many stars in front of, in, or behind Messier 17.

The nebula appears as a complex red structure with some graduation to pink. Its colouring is a signature of glowing hydrogen gas. The short-lived blue stars that recently formed in Messier 17 emit enough ultraviolet light to heat up surrounding gas to the extent that it begins to glow brightly. In the central region the colours are lighter, and some parts appear white. This white colour is real — it arises as a result of mixing the light from the hottest gas with the starlight reflected by dust.

The gas in the nebula is estimated to have more than 30 000 times the mass of the Sun. Messier 17 also contains an open star cluster of 35 stars, which is known as NGC 6618 [1]. The total number of stars in the nebula, however, is much higher — there are almost 800 stars in the centre with even more forming in its outer regions.

Throughout this rosy glow, the nebula shows a web of darker regions of dust that obscure the light. This obscuring material is also glowing and — although these areas are dark in this visible-light image — they look bright when observed using infrared cameras.

The nebula owes its official name to the French comet hunter Charles Messier who included the nebula as the seventeenth object in his famous astronomical catalogue in 1764 [2]. But even with a name as bland as Messier 17, this flowery nebula still looks dazzling.

This picture comes from the ESO Cosmic Gems programme [3].

[1] This designation is also sometimes used for the entire star formation region.

[2] The astronomer Jean Philippe de Chéseaux discovered the object in 1745, but his discovery did not receive widespread attention. Thus, Messier independently rediscovered and catalogued it almost 20 years later. 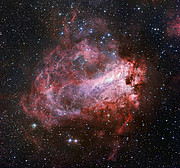 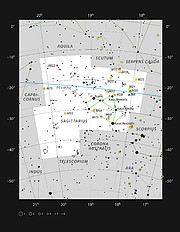