Observations by ALMA and data from the MUSE spectrograph on ESO’s VLT have revealed a colossal fountain of molecular gas powered by a black hole in the brightest galaxy of the Abell 2597 cluster — the full galactic cycle of inflow and outflow powering this vast cosmic fountain has never before been observed in one system.

A mere one billion light-years away in the nearby galaxy cluster known as Abell 2597, there lies a gargantuan galactic fountain. A massive black hole at the heart of a distant galaxy has been observed pumping a vast spout of cold molecular gas into space, which then rains back onto the black hole as an intergalactic deluge. The in- and outflow of such a vast cosmic fountain has never before been observed in combination, and has its origin in the innermost 100 000 light-years of the brightest galaxy in the Abell 2597 cluster.

“This is possibly the first system in which we find clear evidence for both cold molecular gas inflow toward the black hole and outflow or uplift from the jets that the black hole launches,” explained Grant Tremblay of the Harvard-Smithsonian Center for Astrophysics and former ESO Fellow, who led this study. “The supermassive black hole at the centre of this giant galaxy acts like a mechanical pump in a fountain.”

Tremblay and his team used ALMA to track the position and motion of molecules of carbon monoxide within the nebula. These cold molecules, with temperatures as low as minus 250–260°C, were found to be falling inwards to the black hole. The team also used data from the MUSE instrument on ESO’s Very Large Telescope to track warmer gas — which is being launched out of the black hole in the form of jets.

“The unique aspect here is a very detailed coupled analysis of the source using data from ALMA and MUSE,” Tremblay explained. “The two facilities make for an incredibly powerful combination.”

Together these two sets of data form a complete picture of the process; cold gas falls towards the black hole, igniting the black hole and causing it to launch fast-moving jets of incandescent plasma into the void. These jets then spout from the black hole in a spectacular galactic fountain. With no hope of escaping the galaxy’s gravitational clutches, the plasma cools off, slows down, and eventually rains back down on the black hole, where the cycle begins anew.

This unprecedented observation could shed light on the life cycle of galaxies. The team speculates that this process may be not only common, but also essential to understanding galaxy formation. While the inflow and outflow of cold molecular gas have both previously been detected, this is the first time both have been detected within one system, and hence the first evidence that the two make up part of the same vast process.

Abell 2597 is found in the constellation Aquarius, and is named for its inclusion in the Abell catalogue of rich clusters of galaxies. The catalogue also includes such clusters as the Fornax cluster, the Hercules cluster, and Pandora’s cluster.

This research was presented in a paper entitled “A Galaxy-Scale Fountain of Cold Molecular Gas Pumped by a Black Hole”, which appeared in The Astrophysical Journal. 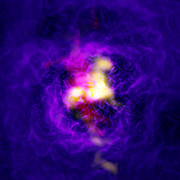 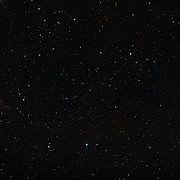 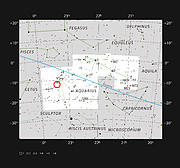 PR Image eso1836c
Abell 2597 in the Constellation of Aquarius

PR Video eso1836b
Zooming in on a Galactic Fountain
Send us your comments!
Subscribe to receive news from ESO in your language
Accelerated by CDN77
Terms & Conditions