On the evening of 11 October 2012 a gala event to celebrate the 50th anniversary of the European Southern Observatory took place in the Kaisersaal of the Munich Residenz in Germany. To mark the occasion, senior representatives of the ESO Member States and its host nation Chile, among them seven Ministers and two Ambassadors, and of the observatory itself, signed a prototype mirror segment of the European Extremely Large Telescope.

The gala event [1] celebrated fifty years of achievements since the signing of the ESO convention in October 1962, which established the organisation. Over the last half century ESO has become the world’s most productive ground-based astronomical observatory by far, and the event was an opportunity to celebrate the contributions of many of the key individuals and organisations who have been instrumental in ESO’s success.

Opening the event, Professor Barcons said “Working together as members of ESO is a vital way for the Member States to develop and build large-scale state-of-the-art astronomical facilities which we couldn't build individually, and also demonstrates how the spirit of scientific collaboration transcends national borders.”

Welcoming the guests to Germany, Professor Dr Annette Schavan, Bundesministerin für Bildung und Forschung said, “The research carried out by ESO is world-class, and we also want to keep this leading position in the future. Success stories live on by continuing to be told, and that is why it is important to carry out the construction of the largest optical telescope in the world, the European Extremely Large Telescope. The E-ELT could give us answers to some of the most pressing questions in astrophysics.”

“Within Bavaria’s fertile research landscape ESO is an outstanding and precious landmark,” added Dr Wolfgang Heubisch, MdL Staatsminister für Wissenschaft, Forschung und Kunst, Bayern, Germany. “It contributes to Bavaria’s reputation as an important site for science and attracts a large number of top scientists from around the globe.”

Professor Tim de Zeeuw talked about the evolution of ESO and its three current observatory sites, La Silla, Paranal, and Chajnantor, as well as Armazones, the site of the future European Extremely Large Telescope. The facilities are the successful embodiment of the organisation’s mission to develop and operate world-class observing facilities for astronomical research, and to support collaborations in astronomy.

“ESO’s success is achieved by its motivated and highly-skilled staff, coupled with vital efforts from industrial, scientific and technical institutions in the Member States,” declared Professor de Zeeuw.

Professor de Zeeuw also looked to the future of both ESO and astronomy, and emphasised the ongoing importance of scientific research for society, noting “If our society does not remain interested in science, it is doomed. There has to be an element of blue-sky thinking and fundamental research.”

Guests also watched excerpts from Europe to the Stars — ESO's first 50 years of Exploring the Southern Sky, a documentary film that tells ESO’s story of designing, building and operating the most powerful ground-based telescopes on the planet.

To round off the evening the heads of the national delegations, and Professors de Zeeuw and Barcons, signed a prototype mirror segment for the European Extremely Large Telescope, the world’s biggest eye on the sky. The E-ELT’s 39-metre-diameter primary mirror will be composed of 798 such hexagonal glass segments, each 1.4 metres across but only 50 millimetres thick. The E-ELT will be by far the world's largest optical and near-infrared telescope. The signatures on this segment will be engraved into the glass, making a permanent memento of this celebration of ESO’s first 50 years.

Speaking after the signing ceremony, Chilean Foreign Minister, Alfredo Moreno, said “Chile's astronomical sites are the clearest on Earth, making them a wonderful gateway to explore the southern skies, and Chile’s strong scientific and technical community is a key support for the development of astronomical research. We are very proud to be the host nation of ESO, and to mark 50 years working together to advance our understanding of the Universe.”

[1] The gala event is one of several activities dedicated to ESO’s anniversary. Further information is available online. 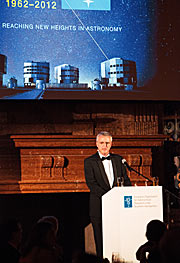 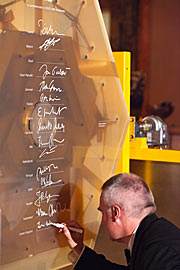