Up to seven planets orbiting a Sun-like star

Astronomers using ESO’s world-leading HARPS instrument have discovered a planetary system containing at least five planets, orbiting the Sun-like star HD 10180. The researchers also have tantalising evidence that two other planets may be present, one of which would have the lowest mass ever found. This would make the system similar to our Solar System in terms of the number of planets (seven as compared to the Solar System’s eight planets). Furthermore, the team also found evidence that the distances of the planets from their star follow a regular pattern, as also seen in our Solar System.

“We have found what is most likely the system with the most planets yet discovered,” says Christophe Lovis, lead author of the paper reporting the result. “This remarkable discovery also highlights the fact that we are now entering a new era in exoplanet research: the study of complex planetary systems and not just of individual planets. Studies of planetary motions in the new system reveal complex gravitational interactions between the planets and give us insights into the long-term evolution of the system.”

The team of astronomers used the HARPS spectrograph, attached to ESO’s 3.6-metre telescope at La Silla, Chile, for a six-year-long study of the Sun-like star HD 10180, located 127 light-years away in the southern constellation of Hydrus (the Male Water Snake). HARPS is an instrument with unrivalled measurement stability and great precision and is the world’s most successful exoplanet hunter.

Thanks to the 190 individual HARPS measurements, the astronomers detected the tiny back and forth motions of the star caused by the complex gravitational attractions from five or more planets. The five strongest signals correspond to planets with Neptune-like masses — between 13 and 25 Earth masses [1] — which orbit the star with periods ranging from about 6 to 600 days. These planets are located between 0.06 and 1.4 times the Earth–Sun distance from their central star.

“We also have good reasons to believe that two other planets are present,” says Lovis. One would be a Saturn-like planet (with a minimum mass of 65 Earth masses) orbiting in 2200 days. The other would be the least massive exoplanet ever discovered [2], with a mass of about 1.4 times that of the Earth. It is very close to its host star, at just 2 percent of the Earth–Sun distance. One “year” on this planet would last only 1.18 Earth-days.

“This object causes a wobble of its star of only about 3 km/hour— slower than walking speed — and this motion is very hard to measure,” says team member Damien Ségransan. If confirmed, this object would be another example of a hot rocky planet, similar to Corot-7b (eso0933).

The newly discovered system of planets around HD 10180 is unique in several respects. First of all, with at least five Neptune-like planets lying within a distance equivalent to the orbit of Mars, this system is more populated than our Solar System in its inner region, and has many more massive planets there [3]. Furthermore, the system probably has no Jupiter-like gas giant. In addition, all the planets seem to have almost circular orbits.

So far, astronomers know of fifteen systems with at least three planets. The last record-holder was 55 Cancri, which contains five planets, two of them being giant planets. “Systems of low-mass planets like the one around HD 10180 appear to be quite common, but their formation history remains a puzzle,” says Lovis.

Using the new discovery as well as data for other planetary systems, the astronomers found an equivalent of the Titius–Bode law that exists in our Solar System: the distances of the planets from their star seem to follow a regular pattern [4]. “This could be a signature of the formation process of these planetary systems,” says team member Michel Mayor.

Another important result found by the astronomers while studying these systems is that there is a relationship between the mass of a planetary system and the mass and chemical content of its host star. All very massive planetary systems are found around massive and metal-rich stars, while the four lowest-mass systems are found around lower-mass and metal-poor stars [5]. Such properties confirm current theoretical models.

The discovery is announced today at the international colloquium “Detection and dynamics of transiting exoplanets”, at the Observatoire de Haute-Provence, France.

[1] Using the radial velocity method, astronomers can only estimate a minimum mass for a planet as the mass estimate also depends on the tilt of the orbital plane relative to the line of sight, which is unknown. From a statistical point of view, this minimum mass is however often close to the real mass of the planet.

[3] On average the planets in the inner region of the HD 10180 system have 20 times the mass of the Earth, whereas the inner planets in our own Solar System (Mercury, Venus, Earth and Mars) have an average mass of half that of the Earth.

[4] The Titius–Bode law states that the distances of the planets from the Sun follow a simple pattern. For the outer planets, each planet is predicted to be roughly twice as far away from the Sun as the previous object. The hypothesis correctly predicted the orbits of Ceres and Uranus, but failed as a predictor of Neptune’s orbit.

[5] According to the definition used in astronomy, “metals” are all the elements other than hydrogen and helium. Such metals, except for a very few minor light chemical elements, have all been created by the various generations of stars. Rocky planets are made of “metals”.

This research was presented in a paper submitted to Astronomy and Astrophysics (“The HARPS search for southern extra-solar planets. XXVII. Up to seven planets orbiting HD 10180: probing the architecture of low-mass planetary systems” by C. Lovis et al.). 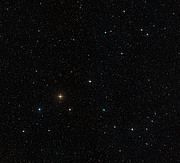 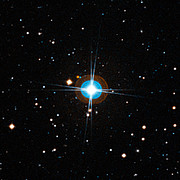