An international team of astronomers [2] is announcing today the discovery of dusty disks surrounding numerous very faint objects that are believed to be recently formed Brown Dwarfs in the Orion Nebula [3]. This finding is based on detailed observations with SOFI, a specialised infrared-sensitive instrument at the ESO 3.5-m New Technology Telescope at the La Silla Observatory. It is of special interest because it sheds light on the origin and nature of substellar objects, known as "Brown Dwarfs". In particular, these results suggest that Brown Dwarfs share a common origin with stars and that Brown Dwarfs are more similar in nature to stars than to planets and, like stars, have the potential to form with accompanying systems of planets. Moreover, the presence of dusty protoplanetary disks around the faintest objects in the Orion Nebula cluster confirms both the membership of these faint stars in the cluster and their nature as bona-fide substellar objects, making this the largest population of Brown Dwarf objects yet known.

These important results are being reported today to the American Astronomical Society Meeting in Pasadena (California, USA).

Over the past 5 years, several groups of astronomers have identified a type of very faint, substellar objects within our Milky Way galaxy. These gaseous objects have very low masses and will never shine like normal stars because they cannot achieve central temperatures high enough for sustained thermal nuclear reactions to occur in their cores.

Such objects weigh less than about 7% of our Sun and have been variously called "Brown Dwarfs", "Failed Stars" or "Super Planets". Indeed, since they have no sustained energy generation by thermal nuclear reactions, many of their properties are more similar to those of giant gas planets in our own solar system such as Jupiter, than to stars like the Sun.

For example, even though their masses range between 10-70 times that of Jupiter (the largest and most massive planet in our solar system), the sizes of Brown Dwarfs are still comparable to that of Jupiter, approximately 140,000 km, or roughly 10 times smaller than the Sun.

Among the most fundamental issues raised by the existence of Brown Dwarfs is the question of their origin and genetic relationship to planets and stars. Are Brown Dwarfs giant planets or small, failed stars, or perhaps something completely different?

The critical test needed to resolve this very basic question is to learn whether Brown Dwarfs form by a process similar to what produces stars or rather to one which produces planets.

Stars are thought to form when gravity causes a cold, dusty and rarefied cloud of gas to contract. Such clouds are inevitably rotating so the gas naturally collapses into a rotating disk before it falls onto the forming star. These disks are called circumstellar or protoplanetary disks . They have been found around virtually all young stars and are considered to be sites of planet formation. Gravity helps planets form too, but this occurs by condensation and agglomeration of material contained in the circumstellar disk around a young star.

Thus, stars form with a disk around them while planets form within disks around young stars . The planets in our own solar system were formed in such a circumstellar disk around the young Sun about 4.6 billion years ago.

To date, the most important observations bearing on the question of Brown Dwarf origin have been:

Both facts would appear to imply a stellar, rather than a planet-like origin for these objects. However, one might also explain these observations if most Brown Dwarfs initially formed as companions to stars (within circumstellar disks), but were later ejected from the systems, e.g., because of gravitational effects during encounters with other stars. So the issue of Brown Dwarf origin is still unsettled.

NTT observations of substellar objects in the Orion Nebula

To resolve this mystery, an international team of astronomers [2] has obtained sensitive near-infrared observations of young Brown Dwarf candidates in the Trapezium cluster, at the centre of the Orion Nebula. For this, they used the state-of-the-art near-infrared SOFI instrument on the ESO 3.5-metre New Technology Telescope (NTT) at the La Silla Observatory (Chile).

The Trapezium Cluster is a group of young stars that appears to the unaided eye as a faint central 'star' in the Orion Nebula . This cluster is located at a distance of about 1200 light-years and contains nearly 1000 stars, most of which are younger than 1 million years. The stars in this cluster are in their infancy when compared to our middle-aged Sun that is about 4.6 billion years old (reduced to a human timescale, they would be just 3 days old, compared to the Sun's 40 years). Among the hundreds of normal stars in the Trapezium Cluster, astronomers have previously identified a population of objects so faint that they have been considered as prime candidates for very young Brown Dwarfs.

The observations obtained with the NTT benefitted from superb atmospheric conditions (e.g., a seeing of 0.5 arcsec) and allowed the astronomers to examine the near-infrared light of more than 100 of the Brown Dwarf candidates in the cluster. More than half of them were found to have excess near-infrared light, compared to that a normal young Brown Dwarf should emit. The only plausible explanation is that this extra light originates from glowing, hot dust within protoplanetary disks surrounding these objects. It was the same method, albeit at longer infrared wavelengths, that first led to the discovery of dust disks around several normal stars, some of which have later been studied in much detail, e.g., that at the southern star Beta Pictoris.

In fact, and strongly supporting this explanation, twenty-one of the Brown Dwarf candidates detected via the NTT observations are also identified with optical "proplyds", the famous dusty disks first imaged in 1994 by the Hubble Space Telescope (HST) at optical wavelengths, c.f. the corresponding HST Press Release and images [4].

The presence of such hot and dusty disks around these objects is a clear sign of their extreme youth - this in turn confirms both their membership in the young cluster and their nature as bona-fide substellar objects . Thus, the Trapezium Cluster contains the largest population (approximately 100) of Brown Dwarfs yet known.

Indeed, only about 80 freely floating Brown Dwarfs have so far been positively identified outside this cluster. "Brown Dwarfs are considerably easier to detect and study when they are young, because they are ten times larger and thousands of times brighter during their early youth than during their middle age", says Elizabeth Lada from the University of Florida and a member of the team.

Her colleague August Muench explains that "even at their brightest, however, most Brown Dwarfs are still 100 or more times intrinsically fainter than our Sun, explaining why astronomers have great difficulties in detecting such objects".

A common origin of normal stars and Brown Dwarfs

Moreover, as is the case for stars, the disks that surround Brown Dwarfs may be capable of forming systems of planets. According to João Alves from ESO, "it is entirely possible that the Milky Way Galaxy contains numerous planetary systems that orbit cold and dark, failed stars. Whether these disks can indeed form planetary systems, however, still remains to be determined".

Even if Brown Dwarfs do have planetary systems, their planets would not have a stable climate and thus would be inhospitable to life as we know it. This is because Brown Dwarfs do not generate their own energy for any substantial period of time but instead fade rapidly as they age.

For the moment being, the detection of disks around the Brown Dwarf candidates in the Trapezium Cluster rests entirely on the measurements of the near-infrared colours of these objects. Additional confirmation of the presence of such dust disks can be obtained with sensitive infrared observations made at longer wavelengths. Such observations are possible with the largest ground-based telescopes like the VLT [5] or with the upcoming NASA infrared satellite mission (SIRTF).

[1] This ESO Press Release is issued in parallel with a Press Release on the same subject by the American Astronomical Society (AAS). The indicated embargo corresponds to the time of release at the AAS meting in Pasadena.

[3] Other ESO Press Communications about Brown Dwarfs include eso9709, eso9942, and eso0023.  A spectacular infrared image of the Orion Nebula with the VLT and the ISAAC instrument was published earlier this year with a discussion about small objects within this nebula.

[4] More information about "proplyds" (PROto-PLanetarY DiskS) is available in eso9706 that discusses the discovery of the first such object outside the Orion Nebula.

[5] The VLT is already equipped with one instrument suited for such measurements, the Infrared Spectrometer And Array Camera (ISAAC) - examples of mid-infrared observations of the giant planet Jupiter have just been published. The NAOS-CONICA adaptive optics multi-mode instrument will enter into operation later in 2001, to be followed by the VLT Mid Infrared Spectrometer/Imager (VISIR). Another powerful mid-infrared facility at ESO is the Thermal Infrared Multimode Instrument (TIMMI2), now in operation at the ESO 3.6-metre telescope on La Silla and with which observations of the central part of the Orion Nebula were recently made. 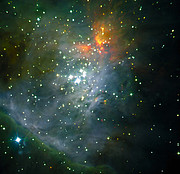 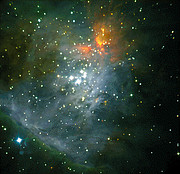