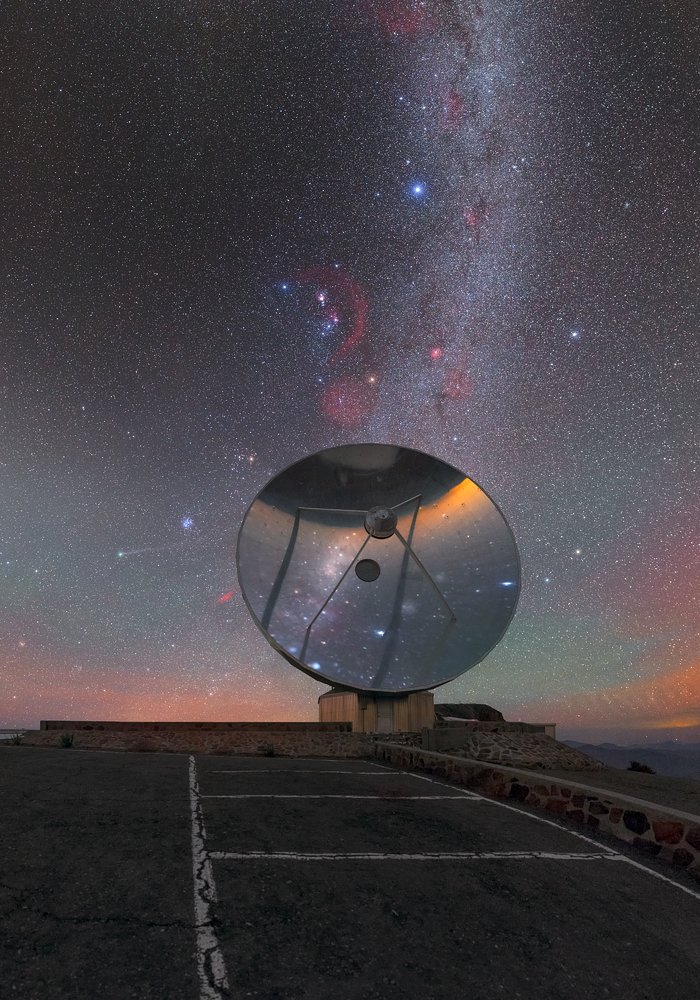 This once-busy eye on the sky now gazes wistfully into the heavens from its mountaintop home. Located at ESO’s La Silla Observatory in Chile’s Atacama Desert, this is the dish of the now-retired Swedish-ESO Submillimetre Telescope (or SEST for short).

The SEST was decommissioned in 2003 to make way for the Atacama Pathfinder Experiment telescope (APEX) and the Atacama Large Millimeter/submillimeter Array (ALMA), both of which sit on the Chajnantor plateau in Chile’s Atacama region (as their names suggest). In its day, the SEST was the largest sub-millimetre telescope in the southern hemisphere; it notably broke new ground in the study of some of the coldest regions in the Milky Way, where stars are just beginning to form from cosmic gas and dust.

The bright streak of the Milky Way rises above the SEST in this image. Within this river of light one can, poetically, see some of the huge star formation regions that the telescope helped us to understand. In fact, one can see in this single image almost the whole of the Milky Way visible from this location — part of it in the sky above, and part reflected off the shiny surface of the telescope dish.

This striking frame includes so many beautiful night sky objects that it justifies a whole new annotated version of this photograph — simply click here to see the locations of everything from the bright stars Sirius and Procyon to the Orion Nebula, the Cone Nebula, the atmospheric and cosmic phenomena of airglow and zodiacal light, Comet Lovejoy, and more.

The image was captured by ESO Photo Ambassador Petr Horálek.