Work is progressing well at ESO's Very Large Telescope (VLT) project, both at the Paranal Observatory and in Europe. Here is a brief summary with recent news from this major project, illustrated with photos from the construction.

It is now almost half a year since the first 8.2-m VLT Unit Telescope (ANTU) was handed over to the astronomers and it continues to deliver excellent observational data. Several research projects for which time was allocated during the past months have reported very good, sometimes spectacular, results. In some cases, the data have already been fully reduced and the astronomers involved are now in the final stages of preparing the associated scientific reports and papers. It is the intention to present some of the new findings from the VLT in a number of ESO Press Releases during the next months.

Following "First Light" in March this year, the commissioning work for the second Unit Telescope (KUEYEN) successfully reached the stage when instruments could be integrated at the different telescope foci. The next major activity, now underway, is the mounting of the large, high-dispersion spectrograph UVES on one of the Nasmyth platforms. UVES is the second major VLT instrument to be built at ESO - it is also one of the heaviest and most complex ones at this astronomical facility.

This delicate work includes the installation and exceedingly accurate alignment of the many optical components on the heavy baseplate, necessary to ensure the highest optical quality during the forthcoming observations. The moment of "UVES First Light" is approaching, with the first test observations of spectra of celestial objects expected in a few weeks from now.

Work on the assembly of FORS2 continued at the Integration Laboratory in the Mirror Maintenance Building (MMB) and the first tests were made. This instrument will be installed at the Cassegrain focus of KUEYEN in late October 1999.

The dummy M1 Mirror Cell was removed in early August from the third Unit Telescope (MELIPAL) and the real Mirror Cell (the third "M1 Cell"), although still with a concrete (dummy) mirror, was installed at the telescope. With a dummy M2 Unit in place at the top of the telescope frame, pointing and tracking tests were initiated. The first image with the guide 20-cm telescope, mounted on the centrepiece and used for these tests, was obtained in late August. As was the case for the first two Unit Telescopes, the mechanical quality of MELIPAL was found to be excellent and the pointing has now been tuned to a few arcsec over the entire sky. The tracking is also very good.

Following these tests, the M1 Cell was again taken down to the MMB at the Base Camp and the dummy concrete mirror was removed. The M1 Cell was moved back up the mountain and stored under the MELIPAL structure until the (third) 8.2-m Zerodur mirror will be installed in mid-November. "First light" with the VLT Test Camera at the Cassegrain focus of this telescope is planned for February 2000.

The fourth Unit Telescope (YEPUN) is now in the final phase of mechanical assembly. Acceptance tests with the supplier with start soon, after which the construction of the four telescope structures will have been finished. The fourth M1 Cell arrived at Paranal in late August. "First Light" for YEPUN is scheduled for July 2000.

The excavation work for the Paranal Residencia proceeds according to schedule, with the first concrete to be cast shortly.

In Europe, major achievements occurred in the area of the VLT Interferometer (VLTI) construction. ESO concluded a contract with REOSC (France) for delivery of all mirrors to equip the four VLT Unit Telescopes with coude foci optics. An important milestone was reached with the completion of the polishing of the optics for the first delay line for the VLTI at REOSC . The integration of the cat's eye will be done at TNO (Nertherlands) and this part will then be integrated into the delay line at Fokker Aerospace (The Netherlands). Shipment to Chile will take place immediately thereafter.

In addition, the 1.8-m primary mirror for the first VLTI Auxiliary Telescope has reached the final stage of the light-weighting process and the optical polishing will soon begin at AMOS (Belgium).

The following digital photos were obtained during August and September 1999 at Paranal and illustrate the developments there. 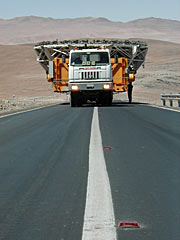 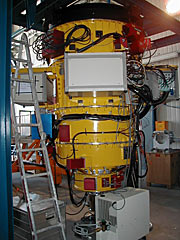