A Forceful Demonstration by FORS

Following a tight schedule, the ESO Very Large Telescope (VLT) project forges ahead - full operative readiness of the first of the four 8.2-m Unit Telescopes will be reached early next year. On September 15, 1998, another crucial milestone was successfully passed on-time and within budget. Just a few days after having been mounted for the first time at the first 8.2-m VLT Unit Telescope (UT1), the first of a powerful complement of complex scientific instruments, FORS1 ( FO cal R educer and S pectrograph), saw First Light . Right from the beginning, it obtained some excellent astronomical images. This major event now opens a wealth of new opportunities for European Astronomy.

FORS1, with its future twin (FORS2), is the product of one of the most thorough and advanced technological studies ever made of a ground-based astronomical instrument. This unique facility is now mounted at the Cassegrain focus of the VLT UT1. Despite its significant dimensions, 3 x 1.5 metres and 2.3 tonnes, it appears rather small below the giant 53 m 2 Zerodur main mirror. Profiting from the large mirror area and the excellent optical properties of the UT1, FORS has been specifically designed to investigate the faintest and most remote objects in the universe. This complex VLT instrument will soon allow European astronomers to look beyond current observational horizons.

The FORS instruments are "multi-mode instruments" that may be used in several different observation modes. It is, e.g., possible to take images with two different image scales (magnifications) and spectra at different resolutions may be obtained of individual or multiple objects. Thus, FORS may first detect the images of distant galaxies and immediately thereafter obtain recordings of their spectra. This allows for instance the determination of their stellar content and distances.

As one of the most powerful astronomical instruments of its kind, FORS1 is a real workhorse for the study of the distant universe.

How FORS was built

The FORS project is being carried out under ESO contract by a consortium of three German astronomical institutes, namely the Heidelberg State Observatory and the University Observatories of Göttingen and Munich. When this project is concluded, the participating institutes will have invested about 180 man-years of work.

The Heidelberg State Observatory was responsible for directing the project, for designing the entire optical system, for developing the components of the imaging, spectroscopic, and polarimetric optics, and for producing the special computer software needed for handling and analysing the measurements obtained with FORS. Moreover, a telescope simulator was built in the shop of the Heidelberg observatory that made it possible to test all major functions of FORS in Europe, before the instrument was shipped to Paranal.

The University Observatory of Göttingen performed the design, the construction and the installation of the entire mechanics of FORS. Most of the high-precision parts, in particular the multislit unit, were manufactured in the observatory's fine-mechanical workshops. The procurement of the huge instrument housings and flanges, the computer analysis for mechanical and thermal stability of the sensitive spectrograph and the construction of the handling, maintenance and aligning equipment as well as testing the numerous opto- and electro-mechanical functions were also under the responsibility of this Observatory.

The University of Munich had the responsibility for the management of the project, the integration and test in the laboratory of the complete instrument, for design and installation of all electronics and electro-mechanics, and for developing and testing the comprehensive software to control FORS in all its parts completely by computers (filter and grism wheels, shutters, multi-object slit units, masks, all optical components, electro motors, encoders etc.). In addition, detailed computer software was provided to prepare the complex astronomical observations with FORS in advance and to monitor the instrument performance by quality checks of the scientific data accumulated.

In return for building FORS for the community of European astrophysicists, the scientists in the three institutions of the FORS Consortium have received a certain amount of Guaranteed Observing Time at the VLT. This time will be used for various research projects concerned, among others, with minor bodies in the outer solar system, stars at late stages of their evolution and the clouds of gas they eject, as well as galaxies and quasars at very large distances, thereby permitting a look-back towards the early epoch of the universe.

First tests of FORS1 at the VLT UT1: a great success

After careful preparation, the FORS consortium has now started the so-called commissioning of the instrument. This comprises the thorough verification of the specified instrument properties at the telescope, checking the correct functioning under software control from the Paranal control room and, at the end of this process, a demonstration that the instrument fulfills its scientific purpose as planned.

While performing these tests, the commissioning team at Paranal were able to obtain images of various astronomical objects, some of which are shown here. Two of these were obtained on the night of "FORS First Light".

The photos demonstrate some of the impressive posibilities with this new instrument. They are based on observations with the FORS standard resolution collimator (field size 6.8 x 6.8 armin = 2048 x 2048 pixels; 1 pixel = 0.20 arcsec).

The first photo shows a reproduction of a colour composite image of the beautiful spiral galaxy NGC 1288 in the southern constellation Fornax. It covers the entire field that was imaged on the 2048 x 2048 pixel CCD camera. It is based on CCD frames in different colours that were taken under good seeing conditions during the night of First Light (15 September 1998). The distance to this galaxy is about 300 million light-years; it recedes with a velocity of 4500 km/sec. Its diameter is about 200,000 light-years.

The next photos are reproduced from a 5-min near-infrared exposure, also obtained during the night of First Light of the FORS1 instrument (September 15, 1998). It shows a sky field near the quasar PB5763 in which is also seen a peculiar, quite distant cluster of galaxies. It consists of a large number of faint and distant galaxies that have not yet been thoroughly investigated. Many other fainter galaxies are seen in other areas, for instance in the right part of the field.

This cluster is a good example of a type of object to which much observing time with FORS will be dedicated, once it enters into regular operation.

An enlargement of the same field is reproduced in the next image. It shows the individual members of this cluster of galaxies in more detail. Note in particular the interesting spindle-shaped galaxy that apparently possesses an equatorial ring. There is also a fine spiral galaxy and many fainter galaxies. They may be dwarf members of the cluster or be located in the background at even larger distances.

This spectacular image of the large spiral galaxy NGC 1232 was obtained on September 21, 1998, during a period of good observing conditions. It is based on three exposures in ultra-violet, blue and red light, respectively. The colours of the different regions are well visible: the central areas contain older stars of reddish colour, while the spiral arms are populated by young, blue stars and many star-forming regions. Note the distorted companion galaxy on the left side of the fourth image, shaped like the greek letter "theta".

NGC 1232 is located 20 o south of the celestial equator, in the constellation Eridanus (The River). The distance is about 100 million light-years, but the excellent optical quality of the VLT and FORS allows us to see an incredible wealth of details. At the indicated distance, the edge of the field shown in the fourth image corresponds to about 200,000 lightyears, or about twice the size of the Milky Way galaxy.

[1] This Press Release is published jointly (in English and German) by the European Southern Observatory, the Heidelberg State Observatory and the University Observatories of Goettingen and Munich. 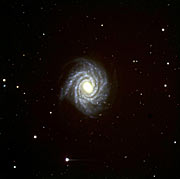 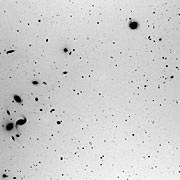 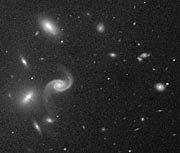 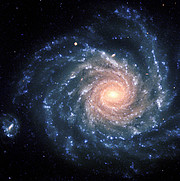 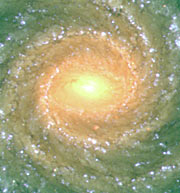