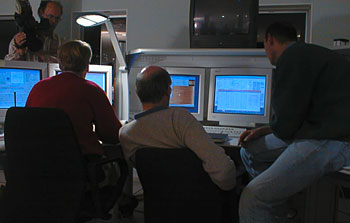 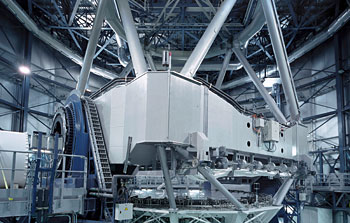 eso9822 — Kurumsal Bülten
VLT Unit Telescope 1 in its Enclosure
17 Haziran 1998: A wide-angle photograph has been obtained that shows for the first time the complete structure of the first 8.2-metre VLT Unit Telescope (UT1) in its enclosure on Paranal.
Devam edin 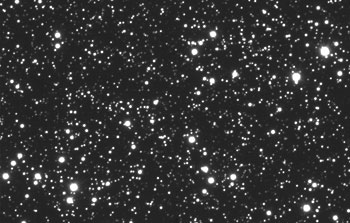 eso9821 — Kurumsal Bülten
The VLT Sharpens its View
10 Haziran 1998: Following the very successful First Light Event in late May, the first 8.2-m Unit Telescope (UT1) of the ESO Very Large Telescope (VLT) has continued to demonstrate its great potential. These developments are reported on a dedicated webpage with new VLT Information.
Devam edin 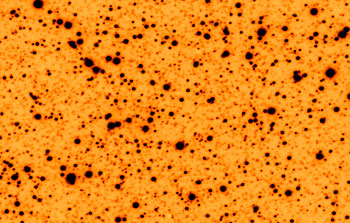 eso9820 — Kurumsal Bülten
A Great Moment for Astronomy
27 Mayıs 1998: The European Southern Observatory announces that First Light has been achieved with the first VLT 8.2-m Unit Telescope at the Paranal Observatory. Scientifically useful images have been obtained as scheduled, on May 25 - 26, 1998.
Devam edin 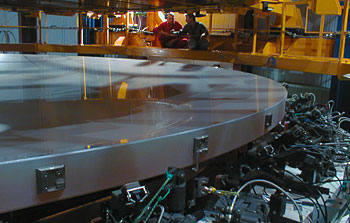 eso9819 — Kurumsal Bülten
First Large VLT Mirror Successfully Coated
21 Mayıs 1998: One of the most crucial operations before the VLT UT1 First Light was successfully concluded late last evening at Paranal. For the first time ever, an astronomical mirror with a total surface of more than 50 m 2 has been coated with a thin (less than 0.0001 mm) and highly reflective layer of extremely pure aluminium. The very good result of this critical operation guarantees that the VLT UT1 will now be able to capture efficiently the faintest light from celestial objects.
Devam edin 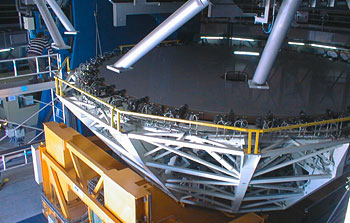 eso9818 — Kurumsal Bülten
VLT 8.2-m Mirror Ready for Coating
19 Mayıs 1998: With the VLT UT1 First Light just one week away, the ultimate activities that lead up to this important event have started at the Paranal Observatory. Following successful optical alignment tests, cf. ESO Press Release 05/98, the 8.2-m primary mirror has been removed from the first Unit Telescope (UT1). It is now in the Mirror Maintenance Building (MMB) and is being prepared for coating with a thin, highly reflective aluminium layer.
Devam edin 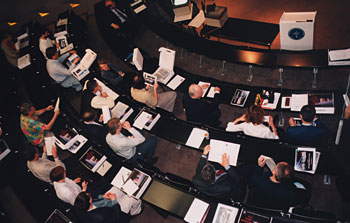 eso9815 — Kurumsal Bülten
Paranal - April 1998
30 Nisan 1998: This is another video clip with recent footage from the Paranal Observatory, illustrating the continuing progress of the VLT project. It was obtained in mid-April 1998 by the ESO EPR Video Team and forms part of the video tape ( UT1-FLE-VNR1 ) with selected video material for broadcast use, issued in connection with the VLT First Light Event.
Devam edin 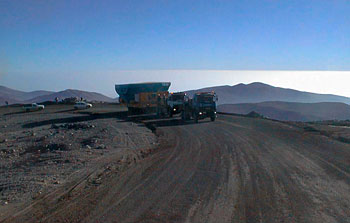 eso9814 — Kurumsal Bülten
Optical Alignment Tests Start at the VLT UT1
27 Nisan 1998: Following the successful installation of the 8.2-m Zerodur main mirror at the first of the four Unit Telescopes (UT1) of the ESO Very Large Telescope (VLT) on April 16, work now continues on the optical alignment of the complex system.
Devam edin 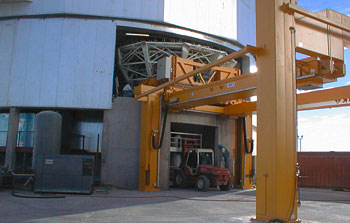 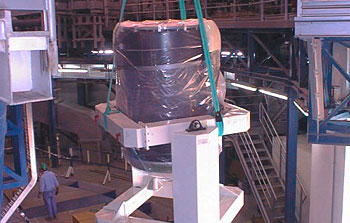 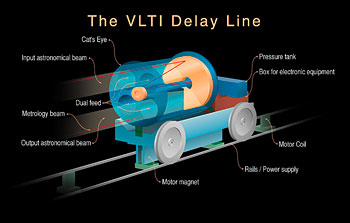 eso9811 — Kurumsal Bülten
ESO and Fokker Space Sign Contract about VLTI Delay Line
11 Mart 1998: The European Southern Observatory is building the world's largest optical telescope, the Very Large Telescope (VLT) , at the ESO Paranal Observatory in Chile. The VLT consists of four 8.2-m unit telescopes and several smaller, moveable Auxiliary Telescopes. When coupled as the giant VLT Interferometer (VLTI) , they will together provide the sharpest images ever obtained by any optical telescope. It will in principle be able to see an astronaut on the surface of the Moon, 400,000 km away.
Devam edin 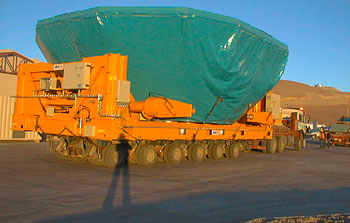 eso9810 — Kurumsal Bülten
Another Job Well Done at Paranal
10 Mart 1998: The VLT assembly work at the ESO Paranal Observatory continues in great strides. During the past week, the mirror cell for the 8.2-m main mirror (the M1 cell ) was successfully attached to the bottom of the telescope tube of Unit Telescope 1 (UT1). The present `picture story' illustrates the various phases of this delicate operation.
Devam edin

eso9809 — Kurumsal Bülten
Getting ISAAC Ready for the VLT
05 Mart 1998: We continue the publication of video clips which illustrate the rapid progress of the VLT project. The present footage of the ISAAC (Infrared Spectrometer and Array Camera) instrument for the ESO Very Large Telescope was obtained last week by the ESO EPR Video Team at the ESO Headquarters in Garching.
Devam edin

eso9808 — Kurumsal Bülten
Tests of FORS - the First Major VLT Instrument
03 Mart 1998: We continue the publication of video clips which illustrate the rapid progress of the VLT project. The present footage of the FORS (FOcal Reducer/low dispersion Spectrograph) instrument for the ESO Very Large Telescope was obtained by the ESO EPR Video Team during a recent mission to DLR (Deutsche Forschungsanstalt für Luft- und Raumfahrt e.V.) in Oberpfaffenhofen near Munich (Germany).
Devam edin 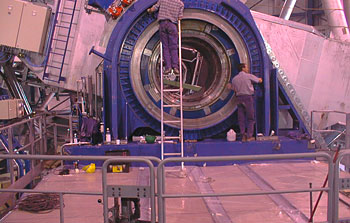 eso9807 — Kurumsal Bülten
Pointing the First 8.2-m VLT Telescope
17 Şubat 1998: Now that the big mechanical pieces of the first 8.2-metre unit telescope (UT1) of ESO's Very Large Telescope (VLT) have been assembled, the work areas have shifted towards the many other components that are needed to make the first giant optical telescope in the southern hemisphere operational. Although most of these items may be of less impressive dimensions, they are equally indispensable to make a telescope of this size and weight point towards a given direction and follow the motion of the celestial objects to be observed with superior accuracy.
Devam edin 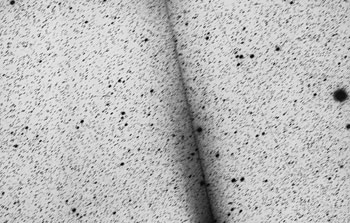 eso9806 — Görüntülü Bülten
The Unusual Tails of Comet Hale-Bopp
30 Ocak 1998: While famous Comet Hale-Bopp continues its long voyage towards the outer reaches of the solar system, observations proceed with telescopes in the southern hemisphere. These research programmes aim at a better understanding of the further development of this very active comet as it moves away from the Sun and slowly cools. Among the key questions are for instance: "When will it cease to display a dust tail?" and "Will the nucleus undergo outbursts during which much fresh material will be dispensed into space, as this has occasionally happened by other comets (e.g. Halley)?"
Devam edin 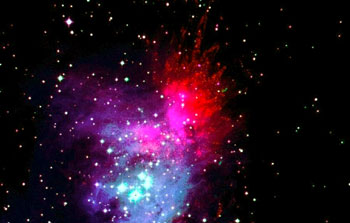 eso9805 — Kurumsal Bülten
Entering SOFI's Wonderful World
29 Ocak 1998: SOFI, ESO's new infrared imager/spectrometer, saw first light at the NTT telescope on December 6, 1997, as planned and less than two years after the start of its detailed design. The acronym stands for 'Son OF ISAAC', the larger Infrared Spectrometer And Array Camera being built by ESO for the VLT.
Devam edin 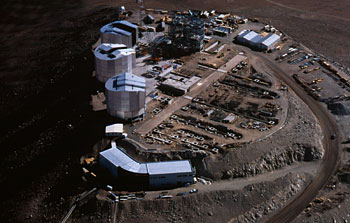