ESO’s ELT home in the desert 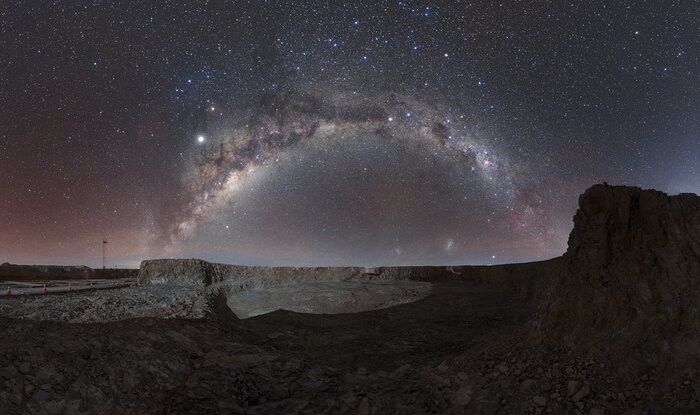 Cerro Armazones is the home of ESO’s upcoming flagship facility, the Extremely Large Telescope (ELT). Located in the Chilean Atacama Desert and just 20 km away from ESO’s Paranal Observatory, home to the Very Large Telescope, Cerro Armazones sits just over 3000 metres above sea level. The isolated nature of this peak is illustrated by a magnificently clear band of the Milky Way galaxy that frames the Armazones crater almost perfectly. This isolation, away from the light pollution of cities, makes the Atacama Desert an ideal location for astronomical facilities, including the ELT, which is set to be “the world’s biggest eye on the sky”.

This image, taken on 5 July 2019, shows the excavated mountaintop, currently a construction site. The pouring of concrete for the foundation began in December 2019, and the construction of this epic telescope is expected to be finished later this decade.