Antu and the Milky Way 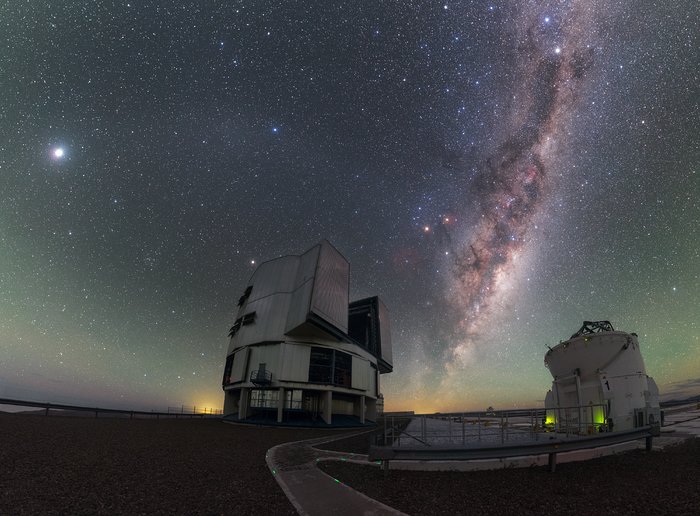 This image shows a beautiful nighttime scene at ESO’s Paranal Observatory in Chile.

The bright band of the Milky Way cuts prominently through the centre of the scene, crammed with bright gas, dark dust, and sparkling stars, seemingly diving downwards to meet the glowing horizon. The boxy structure of UT1 (Antu), one of the four Unit Telescopes comprising the ESO’s Very Large Telescope (VLT), can be seen at the centre of the frame, while a smaller Auxiliary Telescope is visible to the right, its dome wide open as it scans the skies. With its eight telescopes, four of which — the auxiliaries — are movable, the VLT can act as a highly sensitive interferometer — so sensitive, in fact, that it can distinguish between the two headlights of a car at the distance of the Moon!

The beautiful and oft-photographed skies above the VLT are some of the clearest in the world, as witnessed here by the detail in the Milky Way and obvious brightness of Jupiter, the large object to the left of the image. The greenish tint on the horizon is a phenomenon known as airglow — the faint emission of light from chemiluminescence in the atmosphere. Airglow, and other atmospheric effects such as turbulence, are the principal motivation behind space telescopes such as the NASA/ESA Hubble Space Telescope, which observe high above the frustrating optical distortions caused by our atmosphere.