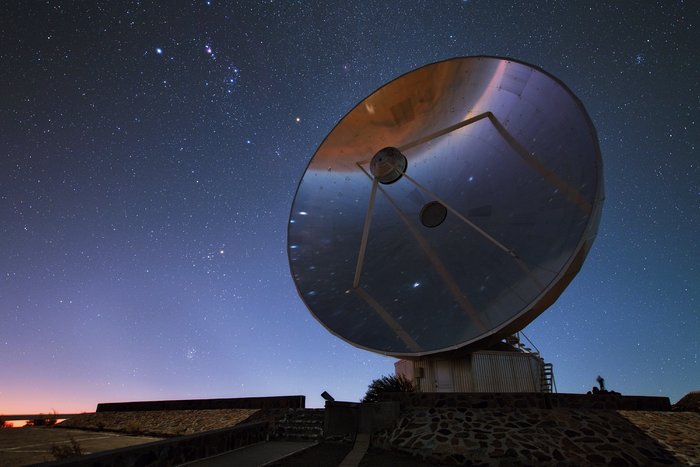 In this scene, one of the most recognisable constellations in the night sky — Orion (The Hunter), with his famous belt and sword — rises over the slumbering Swedish-ESO Submillimetre Telescope (SEST) at ESO’s La Silla Observatory in Chile.

This mythical collection of stars sits on the celestial equator, making it visible in both hemispheres. Within Orion itself, the distinctive blue and pink hues of the Orion Nebula are visible just above the stellar trio comprising Orion’s Belt. Hundreds of new stars are being forged in the depths of this stellar nursery. Telescopes have observed numerous stars wrapped in cocoons of gas and dust — shrouds that will transform into protoplanetary discs as the turbulent youngsters mature.

This image also captures the noticeably reddish colours of Betelgeuse and Aldebaran — giant stars that belong to the constellations of Orion and Taurus (The Bull) respectively. These stars can be seen to the left of the telescope dish, tracing a curved line down towards the ground. Just before meeting the horizon, this line crosses a fuzzy collection of stars — the Pleiades star cluster. According to classical mythology, Orion was a hunter who chased after the Pleiades, the beautiful daughters of Atlas, in order to find love.