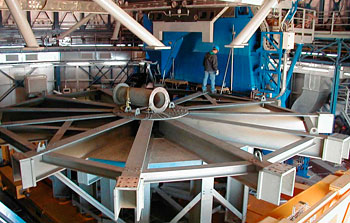 eso0002 — Organisationsmeddelande
"First Light" Approaches for VLT MELIPAL
12 januari 2000: After the first two Unit Telescopes of ESO's Very Large Telescope started their operation in 1999, the year 2000 will witness the "first light" of the other two telescopes, starting with MELIPAL.
Läs mer 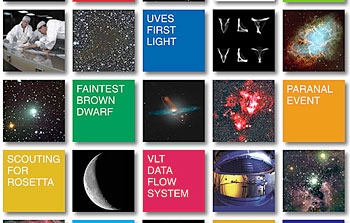 eso0001 — Organisationsmeddelande
ESO PR Highlights in 1999
5 januari 2000: Many different activities took place at ESO during the past year. They range from technological and scientific feats to official and astronomical events at the ESO sites in Europe and Chile.
Läs mer 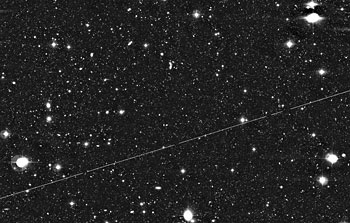 eso9954 — Bildrelease
One Hundred Thousand Galaxies at a Glance
21 december 1999: A main scientific application of wide-angle imaging in astronomy is the census and photometric and morphological classification (i.e. by colour and shape) of large quantities of celestial objects in order to identify sources of particular interest that warrant in-depth follow-up observations. This is normally done by means of spectroscopy, a basic observing technique that allows much more comprehensive physical diagnostics than does an image. However, detailed spectral observations requires the great light-collecting power of large telescopes such as the Very Large Telescope (VLT). In the past, many important classes of astronomical objects have been discovered by such survey work. Another central goal of wide-field imaging is the identification and characterisation of structures that extend over large sky areas, e.g., of the Milky Way in which we live, of comparatively nearby galaxies, and even of the Universe as a whole. The structure of astronomical objects reveals much about their history of formation which, because of the inherently very long ("astronomical") timescales, cannot be directly observed.
Läs mer 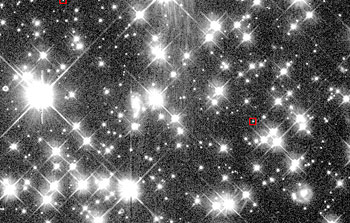 eso9953 — Pressmeddelande (forskning)
New VLT Observations Address the Age of the Universe
16 december 1999: Recent observations with the FORS1 instrument at the first 8.2-m VLT Unit Telescope (ANTU) by an international group of astronomers [1] have resulted in crucial new information about some small and faint stars within an old star cluster in the Milky Way.
Läs mer

eso9952 — Organisationsmeddelande
REOSC Delivers the Best Astronomical Mirror in the World to ESO
14 december 1999: On December 14, 1999, REOSC , the Optical Department of the SAGEM Group , finished the polishing of the fourth 8.2-m main mirror for the Very Large Telescope (VLT) of the European Southern Observatory. The mirror was today delivered to ESO at a ceremony at the REOSC factory in Saint Pierre du Perray, just south of Paris.
Läs mer

eso9949 — Organisationsmeddelande
VLT Commissioning Data Now Publicly Available
29 november 1999: "First Light" was achieved in May 1998 for VLT ANTU, the first 8.2-m Unit Telescope at the Paranal Observatory. Since then, thousands of detailed images and spectra of a great variety of celestial objects have been recorded with this major new research facility. While some of these were obtained for scientific programmes and were therefore directed towards specific research needs, others were made during the "Commissioning Phases" in 1998/99 for the two major astronomical instruments, FORS1 (FOcal Reducer and Spectrograph) and ISAAC (Infrared Spectrometer And Array Camera). They were carried out in order to test thoroughly the performance of the telescope and its instruments before the new facility was handed over to the astronomers on April 1, 1999. The Commissioning data are accordingly of variable quality and, contrarily to the science data, normally not intensity calibrated. However, while some of these frames are short test exposures that mainly served to ascertain the image quality under various observing conditions, a substantial fraction still contains scientifically valuable data.
Läs mer

eso9948 — Organisationsmeddelande
A Powerful Twin Arrives
17 november 1999: The first, major astronomical instrument to be installed at the ESO Very Large Telescope (VLT) was FORS1 ( FO cal R educer and S pectrograph) in September 1998. Immediately after being attached to the Cassegrain focus of the first 8.2-m Unit Telescope, ANTU , it produced a series of spectacular images, cf. ESO PR 14/98. Many important observations have since been made with this outstanding facility. Now FORS2, its powerful twin, has been installed at the second VLT Unit Telescope, KUEYEN. It is the fourth major instrument at the VLT after FORS1 , ISAAC and UVES. The FORS2 Commissioning Team that is busy installing and testing this large and complex instrument reports that "First Light" was successfully achieved already on October 29, 1999, only two days after FORS2 was first mounted at the Cassegrain focus. Since then, various observation modes have been carefully tested, including normal and high-resolution imaging, echelle and multi-object spectroscopy, as well as fast photometry with millisecond time resolution. A number of fine images were obtained during this work, some of which are made available with the present Press Release.
Läs mer

eso9947 — Bildrelease
Solitude of an Observatory
26 oktober 1999: The La Silla Observatory is located in the Chilean Atacama Desert, one of the driest and loneliest areas of the world. The land around this isolated peak was acquired in 1964 and following some years of construction work, the inauguration of ESO's first observatory took place just over 30 years ago, in March 1969. The solitude of this remote desert site is well illustrated by the above panorama, obtained in 1996.
Läs mer

eso9946 — Pressmeddelande (forskning)
Lots of Small Stars Born in Starburst Region
13 oktober 1999: An international group of astronomers [1] has used the ESO Very Large Telescope (VLT) at Paranal (Chile) to perform unique observations of an interstellar nebula in which stars are currently being born.
Läs mer

eso9944 — Organisationsmeddelande
Successful "First Light" for VLT High-Resolution Spectrograph
5 oktober 1999: A major new astronomical instrument for the ESO Very Large Telescope at Paranal (Chile), the UVES high-resolution spectrograph, has just made its first observations of astronomical objects. The astronomers are delighted with the quality of the spectra obtained at this moment of "First Light". Although much fine-tuning still has to be done, this early success promises well for new and exciting science projects with this large European research facility.
Läs mer

eso9943 — Organisationsmeddelande
Recent VLT Progress
17 september 1999: Work is progressing well at ESO's Very Large Telescope (VLT) project, both at the Paranal Observatory and in Europe. Here is a brief summary with recent news from this major project, illustrated with photos from the construction.
Läs mer

eso9942 — Pressmeddelande (forskning)
Faintest Methane Brown Dwarf Discovered with the NTT and VLT
18 augusti 1999: A team of European astronomers [1] has found a cold and extremely faint object in interstellar space, high above the galactic plane. It is a Methane Brown Dwarf of which only a few are known. This is by far the most distant one identified to date.
Läs mer

eso9941 — Bildrelease
Report about the Solar Eclipse on August 11, 1999
18 augusti 1999: This webpage provides information about the total eclipse on Wednesday, August 11, 1999, as it was seen by ESO staff, mostly at or near the ESO Headquarters in Garching (Bavaria, Germany). The zone of totality was about 108 km wide and the ESO HQ were located only 8 km south of the line of maximum totality. The duration of the phase of totality was about 2 min 17 sec.
Läs mer

eso9940 — Organisationsmeddelande
The VLT Writes Its Name
13 augusti 1999: A computer-controlled "Active Optics" system was first developed at ESO in the 1980's. It allows the continuous tuning of the optical system of an astronomical telescope, thus ensuring that it always produces the sharpest possible images of astronomical objects. The first major telescope to profit from this revolution in telescope techniques was the ESO New Technology Telescope (NTT) at the La Silla observatory. Since it began operation in 1990, 75 adjustable supports below the 3.58-m primary mirror, coupled with advanced image analysis and control software, have made this prototype telescope one of the best in the world. Each of the four ESO Very Large Telescope (VLT) Unit Telescopes is equipped with the latest, improved active optics system that controls the primary 8.2-m Zerodur mirror as well as the secondary 1.1-m lightweight beryllium mirror at the top of the telescope structure. This system offers complete control of the optical quality, allowing the VLT to take full advantage of the exceptional atmospheric conditions at Paranal. This is amply confirmed by fine quality of the astronomical observations now performed with the first Unit Telescope, ANTU. In the course of the one-year commissioning period (May 1998 - March 1999), ESO's opticians performed extensive tests and further improvements of the active optics system at ANTU. Here are some interesting examples that illustrate the amazing versatility of this front-line technological system.
Läs mer

eso9939 — Pressmeddelande (forskning)
Watching the Birth of a Galaxy Cluster?
30 juli 1999: When the first 8.2-m VLT Unit Telescope (ANTU) was "handed over" to the scientists on April 1, 1999, the first "visiting astronomers" at Paranal were George Miley and Huub Rottgering from the Leiden Observatory (The Netherlands) [1]. They obtained unique pictures of a distant exploding galaxy known as 1138 - 262. These images provide new information about how massive galaxies and clusters of galaxies may have formed in the early Universe.
Läs mer

eso9938 — Pressmeddelande (forskning)
Extrasolar Giant Planet in Earth-like Orbit
29 juli 1999: A new extrasolar planet has been found at the ESO La Silla Observatory as a companion to iota Horologii (iota Hor). This 5.4-mag solar-type star is located at a distance of 56 light-years and is just visible to the unaided eye in the southern constellation Horologium (The Pendulum Clock).
Läs mer 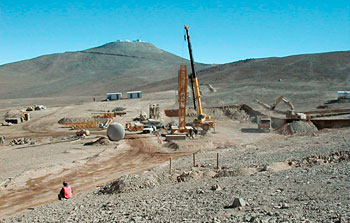 eso9937 — Organisationsmeddelande
A Home in the Desert
28 juli 1999: The Paranal Observatory, site of ESO's Very Large Telescope (VLT) , is a long way from anywhere. Located in the northern part of the Chilean Atacama Desert, one of the driest areas of the world, it is also the working place for about one-hundred ESO staff members, some from Chile and others from Europe. Paranal was an empty mountain when the construction of the ESO observatory began here in 1991. Since then, a small community has sprung up at this desolate site. A significant investment has been made here to establish the complex infrastructure that is needed to ensure the proper running of this high-tech research facility. Everything has to be trucked in, from water and food to telescope spare parts. Electricity is generated by several diesel motors that maintain a stable power supply to the sensitive astronomical instruments and also to all devices needed for a minimum of comfort for the staff and visitors. From the outset, they have been living in housing containers at the "Base Camp". The workers and engineers of the contracting firms have also been living in similar quarters across the main road that leads to the telescopes at the top of the mountain.
Läs mer
Visar 921-940 av 1268
FörraNästa
Usage of ESO Images, Videos, Web texts and Music