A trip to Mars 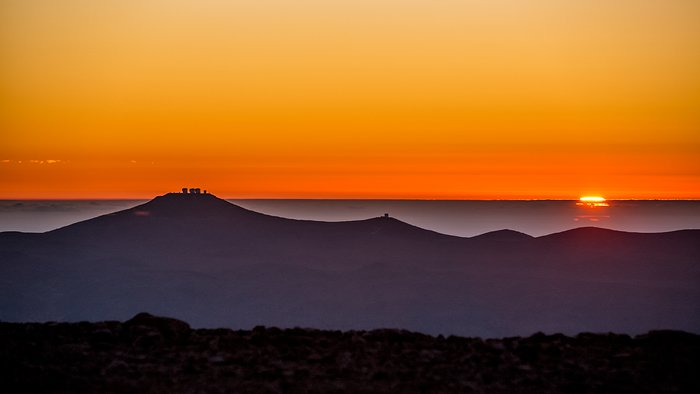 Many ESO Pictures of the Week feature distant cosmic objects — mysterious jumbles of stars, gas, dust and more sitting millions of light-years away. This panorama, however, showcases a somewhat more tangible, but no less glorious, beauty — that of our home planet, Earth.

Captured as the Sun slips below a false horizon of cloud, the sky glows in such a vivid shade of orange that the desert landscape takes on an almost alien appearance. In fact, the Chilean Atacama desert has been used previously by film crews seeking a Mars-like landscape! This other-worldly look is due to the exceptionally arid climate and the site’s complete isolation. The lack of humidity, rain and light pollution together produce both a dusty, rocky landscape and some of the most spectacularly clear skies found anywhere on Earth.

This image was taken by ESO’s Simon Lowery in 2016 from Cerro Armazones, the future home of the Extremely Large Telescope (ELT). The Paranal site, home to the Very Large Telescope (VLT), is just visible beyond the hilltops running across the centre of the frame. The constituent telescopes of the VLT can here be seen alongside the VLT Survey Telescope (VST) on the leftmost hill, whilst the Visible and Infrared Survey Telescope for Astronomy (VISTA) sits on an adjacent peak.