Lutetia: a Rare Survivor from the Birth of the Earth

New observations indicate that the asteroid Lutetia is a leftover fragment of the same original material that formed the Earth, Venus and Mercury. Astronomers have combined data from ESA’s Rosetta spacecraft, ESO’s New Technology Telescope, and NASA telescopes. They found that the properties of the asteroid closely match those of a rare kind of meteorites found on Earth and thought to have formed in the inner parts of the Solar System. Lutetia must, at some point, have moved out to its current location in the main asteroid belt between Mars and Jupiter.

A team of astronomers from French and North American universities have studied the unusual asteroid Lutetia in detail at a very wide range of wavelengths [1] to deduce its composition. Data from the OSIRIS camera on ESA’s Rosetta spacecraft [2], ESO’s New Technology Telescope (NTT) at the La Silla Observatory in Chile, and NASA’s Infrared Telescope Facility in Hawaii and Spitzer Space Telescope were combined to create the most complete spectrum of an asteroid ever assembled [3].

This spectrum of Lutetia was then compared with that of meteorites found on Earth that have been extensively studied in the laboratory. Only one type of meteorite — enstatite chondrites— was found to have properties that matched Lutetia over the full range of colours.

Enstatite chondrites are known to be material that dates from the early Solar System. They are thought to have formed close to the young Sun and to have been a major building block in the formation of the rocky planets [4], in particular the Earth, Venus and Mercury [5]. Lutetia seems to have originated not in the main belt of asteroids, where it is now, but much closer to the Sun.

“But how did Lutetia escape from the inner Solar System and reach the main asteroid belt?” asks Pierre Vernazza (ESO), the lead author of the paper.

Astronomers have estimated that less than 2% of the bodies located in the region where Earth formed, ended up in the main asteroid belt. Most of the bodies of the inner Solar System disappeared after a few million years as they were incorporated into the young planets that were forming. However, some of the largest, with diameters of about 100 kilometres or more, were ejected to safer orbits further from the Sun.

Lutetia, which is about 100 kilometres across, may have been tossed out from the inner parts of the young Solar System if it passed close to one of the rocky planets and thus had its orbit dramatically altered [6]. An encounter with the young Jupiter during its migration to its current orbit could also account for the huge change in Lutetia’s orbit [7].

“We think that such an ejection must have happened to Lutetia. It ended up as an interloper in the main asteroid belt and it has been preserved there for four billion years,” continues Pierre Vernazza.

Earlier studies of its colour and surface properties showed that Lutetia is a very unusual and rather mysterious member of the asteroid main belt. Previous surveys have shown that similar asteroids are very rare and represent less than 1% of the asteroid population of the main belt. The new findings explain why Lutetia is different — it is a very rare survivor of the original material that formed the rocky planets.

“Lutetia seems to be the largest, and one of the very few, remnants of such material in the main asteroid belt. For this reason, asteroids like Lutetia represent ideal targets for future sample return missions. We could then study in detail the origin of the rocky planets, including our Earth,” concludes Pierre Vernazza.

[1] The electromagnetic spectrum represents the complete range of wavelengths covered by the different types of electromagnetic radiation. Visible light is the most familiar form, but many others exist. Many of these types of radiation are used in everyday life, such as radio waves, microwaves, infrared and ultraviolet light and X-rays.

[2] The Rosetta spacecraft, on its way to comet 67P/Churyumov-Gerasimenko, flew past Lutetia on 10 July 2010.

[4] The enstatite chondrites (E chondrites) are a unique class of meteorites that account for only about 2% of the recovered meteorite falls. The unusual mineralogy and chemistry of E chondrites is consistent with formation relatively close to the Sun. This is further supported by isotope measurements (verified for oxygen, nitrogen, ruthenium, chromium and titanium): E chondrites are the only groups of chondrites that have the same isotopic composition as the Earth and Moon system. This strongly suggests that the Earth formed from enstatite chondrite-type materials and also that E chondrites formed at about the same distance from the Sun as the Earth.

[5] Although they all formed from similar material, it remains a mystery why the inner three planets are so different.

[6] This process is very much like the gravitational assist methods used to change the direction and speed of space probes by arranging for them to fly close to a planet.

[7] Some astronomers think that the gaseous giant may have been closer to the Sun in the early days of the Solar System, before moving outwards to its current position. This would have caused havoc in the orbits of other objects of the inner Solar System due to the huge gravitational pull of Jupiter.

This research was presented in a paper, “Asteroid (21) Lutetia as a remnant of Earth’s precursor planetesimals”, to appear in the journal Icarus. 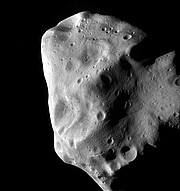