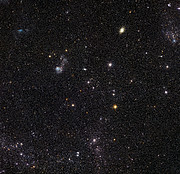 PR видео eso1021a
Zooming in on the Large Magellanic Cloud