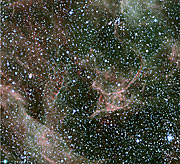 PR изображение eso0650b
SN 1987A and the Honeycomb Nebula