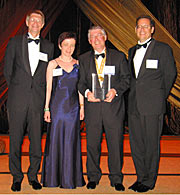 Zdjęcie eso0519a
ESO receives the award in the science category