Rise of the Milky Way 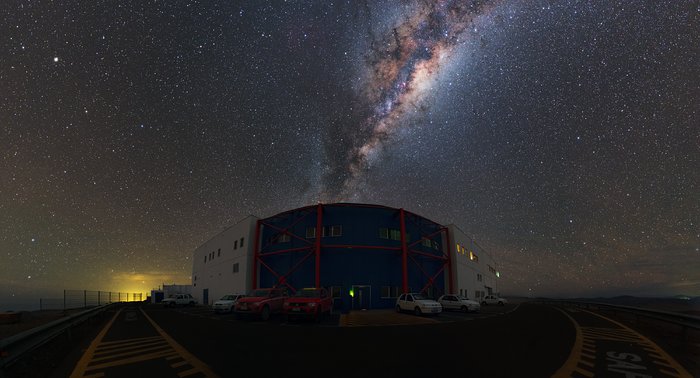 In this image, taken by ESO Photo Ambassador Yuri Beletsky, the control building at the Paranal Observatory can be seen below a rising Milky Way, like the proverbial pot of gold at the end of a celestial rainbow.

This building is a hub for the observatory’s operations, and it is from here that the Very Large Telescope (VLT), the VLT interferometer (VLTI), the VLT Survey Telescope (VST) and VLT Infrared Survey Telescope for Astronomy (VISTA) are controlled and maintained. The team of astronomers, telescope and instrument operators, and engineers is on site 24 hours a day to to run these telescopes and to keep them in top condition.

The control building is located on a “shelf” below the main observing platform at the top of the Paranal Mountain. All functions of the four Unit Telescopes (UTs), the four Auxiliary Telescopes (ATs), the two survey telescopes are controlled from their own areas within the central control room, via a gigantic series of computers.

However, managing the observations is not just a matter of pointing the telescope towards an astronomical target — continuous monitoring of the telescope status is required, as well as making adjustments to the instruments before taking exposures to optimise their function. It is also necessary to transfer and store the large amounts of data generated, as well as check the quality of the incoming results.

Not even the incredible view outside the window is enough to prevent the team from working hard to maintain Paranal’s reputation as one of the world’s most productive and powerful ground-based observatories.