Based on a vast observational effort with different telescopes and instruments, ESO-astronomer Dieter Nürnberger has obtained a first glimpse of the very first stages in the formation of heavy stars. These critical phases of stellar evolution are normally hidden from the view, because massive protostars are deeply embedded in their native clouds of dust and gas, impenetrable barriers to observations at all but the longest wavelengths. In particular, no visual or infrared observations have yet "caught" nascent heavy stars in the act and little is therefore known so far about the related processes. Profiting from the cloud-ripping effect of strong stellar winds from adjacent, hot stars in a young stellar cluster at the center of the NGC 3603 complex, several objects located near a giant molecular cloud were found to be bona-fide massive protostars, only about 100,000 years old and still growing. Three of these objects, designated IRS 9A-C, could be studied in more detail. They are very luminous (IRS 9A is about 100,000 times intrinsically brighter than the Sun), massive (more than 10 times the mass of the Sun) and hot (about 20,000 degrees). They are surrounded by relative cold dust (about 0°C), probably partly arranged in disks around these very young objects. Two possible scenarios for the formation of massive stars are currently proposed, by accretion of large amounts of circumstellar material or by collision (coalescence) of protostars of intermediate masses. The new observations favour accretion, i.e. the same process that is active during the formation of stars of smaller masses.

How do massive stars form?

This question is easy to pose, but so far very difficult to answer. In fact, the processes that lead to the formation of heavy stars [1] is currently one the most contested areas in stellar astrophysics.

While many details related to the formation and early evolution of low-mass stars like the Sun are now well understood, the basic scenario that leads to the formation of high-mass stars still remains a mystery. It is not even known whether the same characterizing observational criteria used to identify and distinguish the individual stages of young low-mass stars (mainly colours measured at near- and mid-infrared wavelengths) can also be used in the case of massive stars.

Two possible scenarios for the formation of massive stars are currently being studied. In the first, such stars form by accretion of large amounts of circumstellar material; the infall onto the nascent star varies with time. Another possibility is formation by collision (coalescence) of protostars of intermediate masses, increasing the stellar mass in "jumps".

Both scenarios impose strong limitations on the final mass of the young star. On one side, the accretion process must somehow overcome the outward radiation pressure that builds up, following the ignition of the first nuclear processes (e.g., deuterium/hydrogen burning) in the star's interior, once the temperature has risen above the critical value near 10 million degrees.

On the other hand, growth by collisions can only be effective in a dense star cluster environment in which a reasonably high probability for close encounters and collisions of stars is guaranteed.

Which of these two possibilties is then the more likely one?

Massive stars are born in seclusion

There are three good reasons that we know so little about the earliest phases of high-mass stars:

First, the formation sites of such stars are in general much more distant (many thousands of light-years) than the sites of low-mass star formation. This means that it is much more difficult to observe details in those areas (lack of angular resolution).

Next, in all stages, also the earliest ones (astronomers here refer to "protostars"), high-mass stars evolve much faster than low-mass stars. It is therefore more difficult to "catch" massive stars in the critical phases of early formation.

And, what is even worse, due to this rapid development, young high-mass protostars are usually very deeply embedded in their natal clouds and therefore not detectable at optical wavelengths during the (short) phase before nuclear reactions start in their interior. There is simply not enough time for the cloud to disperse - when the curtain finally lifts, allowing a view of the new star, it is already past those earliest stages.

Is there a way around these problems? "Yes", says Dieter Nürnberger of ESO-Santiago, "you just have to look in the right place and remember Bob Dylan...!". This is what he did.

"The answer, my friend, is blowing by the wind..."

Imagine that it would be possible to blow away most of the obscuring gas and dust around those high-mass protostars! Even the strongest desire of the astronomers cannot do it, but there are fortunately others who are better at it!

Some high-mass stars form in the neighbourhood of clusters of hot stars, i.e., next to their elder brethren. Such already evolved hot stars are a rich source of energetic photons and produce powerful stellar winds of elementary particles (like the "solar wind" but many times stronger) which impact on the surrounding interstellar gas and dust clouds. This process may lead to partial evaporation and dispersion of those clouds, thereby "lifting the curtain" and letting us look directly at young stars in that region, also comparatively massive ones at a relatively early evolutionary stage.

Such premises are available within the NGC 3603 stellar cluster and star-forming region that is located at a distance of about 22,000 light-years in the Carina spiral arm of the Milky Way galaxy.

NGC 3603 is one of the most luminous, optically visible "HII-regions" (i.e. regions of ionized hydrogen - pronounced "eitch-two") in our galaxy. At its centre is a massive cluster of young, hot and massive stars (of the "OB-type") - this is the highest density of evolved (but still relatively young) high-mass stars known in the Milky Way.

These hot stars have a significant impact on the surrounding gas and dust. They deliver a huge amount of energetic photons that ionize the interstellar gas in this area. Moreover, fast stellar winds with speeds up to several hundreds of km/sec impact on, compress and/or disperse adjacent dense clouds, referred to by astronomers as "molecular clumps" because of their content of complex molecules, many of these "organic" (with carbon atoms).

One of these molecular clumps, designated "NGC 3603 MM 2" is located about 8.5 light-years south of the NGC 3603 cluster, cf. ESO Press Photo eso0317. Located on the cluster-facing side of this clump are some highly obscured objects, known collectively as "NGC 3603 IRS 9". The present, very detailed investigation has allowed to characterise them as an association of extremely young, high-mass stellar objects.

They represent the only currently known examples of high-mass counterparts to low-mass protostars which are detected at infrared wavelengths. It took quite an effort [2] to unravel their properties with a powerful arsenal of state-of-the-art instruments working at different wavelengths, from the infrared to the millimeter spectral region.

To begin with, near-infrared imaging was performed with the ISAAC multi-mode instrument at the 8.2-m VLT ANTU telescope, cf. ESO Press Photo eso0317. This allowed to distinguish between stars which are bona-fide cluster members and others which happen to be seen in this direction ("field stars"). It was possible to measure the extent of the NGC 3603 cluster which was found to be about about 18 light-years, or 2.5 times larger than assumed before. These observations also served to show that the spatial distributions of low- and high-mass cluster stars are different, the latter being more concentrated towards the centre of the cluster core.

Millimeter observations were made by means of the Swedish-ESO Submillimeter Telescpe (SEST) at the La Silla Observatory. Large-scale mapping of the distribution of the CS-molecule showed the structure and motions of the dense gas in the giant molecular cloud, from which the young stars in NGC 3603 originate. A total of 13 molecular clumps were detected and their sizes, masses and densities were determined. These observations also showed that the intense radiation and strong stellar winds from the hot stars in the central cluster have "carved a cavity" in the molecular cloud; this comparatively empty and transparent region now measures about 8 light-years across.

Mid-infrared imaging (at wavelengths 11.9 and 18 µm) was made of selected regions in NGC 3603 with the TIMMI 2 instrument mounted on the ESO 3.6-m telescope. This constitutes the first sub-arcsec resolution mid-IR survey of NGC 3603 and serves in particular to show the warm dust distribution in the region. The survey gives a clear indication of intense, on-going star formation processes. Many different types of objects were detected, including extremely hot Wolf-Rayet stars and protostars; altogether 36 mid-IR point sources and 42 knots of diffuse emission were identified. In the area surveyed, the protostar IRS 9A is found to be the most luminous point source at both wavelengths; two other sources, designated IRS 9B and IRS 9C in the immediate vicinity are also very bright on the TIMMI 2 images, providing further indication that this is the site of an association of protostars in its own right.

The collection of high-quality images of the IRS 9 area shown in ESO Press Photo eso0317 is well suited to investigate the nature and the evolutionary status of the highly obscured objects located there, IRS 9A-C. They are situated on the side of the massive molecular cloud core NGC 3603 MM 2 that faces the central cluster of young stars (ESO Press Photo eso0317) and were apparently only recently "liberated" from most of their natal gas and dust environment by strong stellar winds and energetic radiation from the nearby high-mass cluster stars.

The combined data lead to a clear conclusion: IRS 9A-C represent the brightest members of a sparse association of protostars, still embedded in circumstellar envelopes, but in a region of the pristine molecular cloud core, now largely "blown-free" from gas and dust. The intrinsic brightness of these nascent stars is impressive: 100,000, 1000 and 1000 times that of the Sun for IRS 9A, IRS 9B and IRS 9C, respectively.

Their brightness and infrared colours give information about the physical properties of these protostars. They are very young in astronomical terms, probably less than 100,000 years old. They are already quite massive, though, more than 10 times heavier than the Sun, and they are still growing - comparison to the currently most reliable theoretical models suggests that they accrete material from their envelopes at the relatively high rate of up to 1 Earth mass per day, i.e., the mass of the Sun in 1000 years.

What do the massive protostars tell us?

Dieter Nürnberger is pleased: "We now have convincing arguments to consider IRS 9A-C as a kind of Rosetta Stones for our understanding of the earliest phases of the formation of massive stars. I know of no other high-mass protostellar candidates which have been revealed at such an early evolutionary stage - we must be grateful for the curtain-lifting stellar winds in that area! The new near- and mid-infrared observations are giving us a first look into this extremely interesting phase of stellar evolution."

The observations show that criteria (e.g., infrared colours) already established for the identification of very young (or proto-) low-mass stars apparently also hold for high-mass stars. Moreover, with reliable values of their brightness (luminosity) and temperature, IRS 9A-C may serve as crucial and discerning test cases for the currently discussed models of high-mass star formation, in particular of accretion models versus coagulation models.

The present data are well consistent with the accretion models and no objects of intermediate luminosity/mass were found in the immediate neighbourhood of IRS 9A-C. Thus, for the IRS 9 association at least, the accretion scenario is favoured against the collision scenario.

The research described in this press release is presented in a research article, which recently appeared in the European research journal Astronomy & Astrophysics ("Infrared observations of NGC 3603 III. The enigmatic, highly reddened sources of IRS 9" by Dieter Nürnberger). It is available on the web as HTML-, PDF- and PS-formatted files. 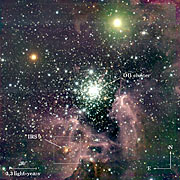 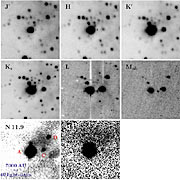 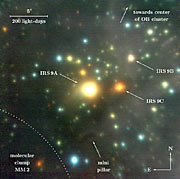