The intensive and exciting hunt for planets around other stars ("exoplanets") is continuing with great success in both hemispheres. Today, a team of astronomers of the Geneva Observatory [1] are announcing the discovery of no less than eight new, very-low mass companions to solar-type stars. The masses of these objects range from less than that of planet Saturn to about 15 times that of Jupiter.

The new results were obtained by means of high-precision radial-velocity measurements with the CORALIE spectrometer at the Swiss 1.2-m Leonhard Euler telescope at the ESO La Silla Observatory. An earlier account of this research programme is available as eso9855.

This observational method is based on the detection of changes in the velocity of the central star, due to the changing direction of the gravitational pull from an (unseen) exoplanet as it orbits the star. The evaluation of the measured velocity variations allows to deduce the planet's orbit, in particular the period and the distance from the star, as well as a minimum mass [2].

The characteristics of the new objects are quite diverse. While six of them are most likely bona-fide exoplanets, two are apparently very low-mass brown-dwarfs (objects of sub-stellar mass without a nuclear energy source in their interior).

From the first discovery of an exoplanet around the star 51 Pegasi in 1995 (by Michel Mayor and Didier Queloz of the present team), the exoplanet count is now already above 40.

"The present discoveries complete and enlarge our still preliminary knowledge of extra-solar planetary systems, as well as the transition between planets and `brown dwarfs'", say Mayor and Queloz, on behalf of the Swiss team.

An overview of the new objects

The sizes and shapes of the orbits of the eight new planets and brown-dwarf candidates are illustrated in the images . More details about the individual objects are given below.
A sub-saturnian planet in orbit around HD 168746

HD 168746 is a quiescent solar-like star of type G5 in the constellation Scutum (The Shield). It is slightly less massive than the Sun (0.92 solar mass) and is located at a distance of about 140 light-years. The visual magnitude is 7.9, i.e. about six times too faint to be seen with the unaided eye.

The Swiss team found a new planet that orbits this star every 6.4 days, a fairly short period. The orbit is circular and the deduced minimum mass of the planet is only 80% of the mass of planet Saturn. This is only the third exoplanet detected so far with a possible sub-saturnian mass.

The companion of HD 83443 is particularly remarkable, not only by virtue of its low mass - it is also the exoplanet so far detected with the shortest period (2.986 days) and the smallest distance to the central star, only 5.7 million km (0.038 AU), i.e., 26 times smaller than the Sun-Earth distance. HD 83443 is of type K0V, it is at a distance of 141 light-years and is somewhat less massive than our Sun (0.8 solar mass).

Most interestingly, a small change with time (a "drift") of the mean velocity variation of HD 83443 has been detected. This drift suggests the possible existence of an additional low-mass companion; earlier measurements show that it cannot be due to a more distant stellar companion.

As for all other short-period exoplanets, this "Hot Saturn" offers good chances for future observations of a planetary transit across the disk of the central star, seen when the planetary orbit is (nearly) perpendicular to the sky plane. Precise photometric monitoring of the star has been conducted by a team of Danish astronomers with their 50-cm telescope at La Silla, but has so far failed to reveal any drop of the stellar luminosity.

The mass of HD 108147 (of type F9-G0V) is slightly above that of the Sun (1.05 solar mass). The orbit of its low-mass companion is surprisingly eccentric (e = 0.56), despite of its fairly short period of 10.88 days. This star seems to be rather "young" (about 2,000 million years old); this is also corroborated by a comparatively high rotational velocity and a moderate chromospheric activity level.

Whereas all giant planets in our own solar system (Jupiter, Saturn, Neptune, Uranus) have nearly circular orbits, most of the extra-solar planets that have been discovered with periods of months to years are elongated. The origin of the elongated shape of those planetary orbits is still under debate.

While about 40 giant exoplanet-candidates have so far been detected with masses in the range from 0.22 to 8.13 times that of Jupiter, only one companion object (in orbit around the star HD 114762) was known until now with a minimum mass between 10 and 15 times that of Jupiter. Such objects, referred to as "brown dwarfs", are easier to detect than giant planets with similar periods because their greater mass induces larger velocity changes of the central star; they must therefore be very rare. This strongly points towards different formation/evolution processes for giant planets and stellar companions in the brown-dwarf domain.

The brown-dwarf candidate around HD 162020 orbits this star (in constellation Scorpius - the Scorpion; visual magnitude 9.1; stellar type K2V) in 8.43 days on a moderately eccentric orbit. The inferred minimum mass of the companion is 13.7 times that of Jupiter.

The second brown-dwarf candidate has a comparable minimum mass of 14.7 Jupiter masses. It orbits HD 202206 (in constellation Capricornus; visual magnitude 8.1; stellar type G6V) in 259 days and the orbit is fairly eccentric.

The search for exoplanets: current status

Most of the stars around which giant planets have been found so far show a significant excess of heavy elements in their atmosphere when compared to the majority of stars of the solar vicinity. This is also the case for most of the central stars of the eight new objects described here. This additional indication of an abnormal chemical composition of stars with giant gaseous planets provides a promising line for a better understanding of the mechanism(s) that ultimately lead to the formation of planetary systems.

The high-precision radial-velocity survey with CORALIE in the southern hemisphere has the ambitious goal to make a complete inventory of giant exoplanets orbiting about 1600 stars in our galactic neighbourhood, all of which are relatively similar to our Sun. To date, 11 such exoplanets have been detected by CORALIE within this programme.

This repartition of observed planetary masses (and low-mass brown dwarfs) strongly suggests that the maximum mass for giant exoplanets is less than 10 Jupiter masses.

Continuation of the programme

Significant progress within the current programme is expected soon, when the Very Large Telescope Interferometer (VLTI), now being constructed at Paranal, will become available. This new instrument will have the observational capability of very high-accuracy astrometry and thus to detect even very small wobbles of stellar positions that are due to orbiting planets. This will provide a crucial contribution to the determination of the true repartition of exoplanetary masses, a hotly debated question.

Important advancement in our understanding of the formation of planetary systems is also expected with the advent of HARPS. This new high-resolution spectrograph, capable of reaching a radial-velocity precision of 1 m/sec, will be installed on the ESO 3.6-metre telescope at La Silla. HARPS will extend the domain of planets accessible with the radial-velocity technique towards significantly lower masses - down to about ten Earth masses on short-period orbits. It will also greatly improve our capability of detecting planets with longer periods and multi-planet systems.

[2] A fundamental limitation of the radial-velocity method, currently used by all planet-hunting research teams, is that because of the uncertainty of the inclination of the planetary orbit, it only allows to determine a lower mass limit for the planet. However, statistical considerations indicate that in most cases, the true mass will not be much higher than this value. The mass units for the exoplanets used in this text are 1 Jupiter mass = 3.35 Saturn masses = 318 Earth masses; 1 Saturn mass = 95 Earth masses.

[3] The exoplanet in orbit around HD 52265 was independently announced last week by another group.

Further detailed information about these new planet candidates, as well as the corresponding radial-velocity curves, are available on the dedicated web page at the Geneva Observatory web site. 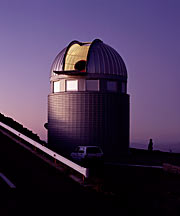 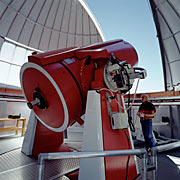