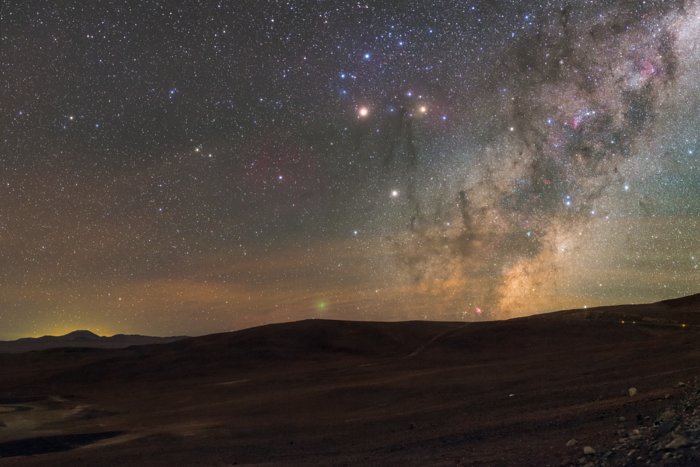 Planets, the Galactic centre, stars, glowing gas, silhouetted mountains, and even a comet — this Picture of the Week, taken near the main entrance building of ESO’s Paranal Observatory, is aglow with all the splendours of the clear Chilean skies.

On the horizon, a green object shines like a round, fuzzy blob; this is actually an interplanetary visitor called Comet 252P/LINEAR. This comet was pictured as it soared past the Earth in April 2016, skimming some 5.3 million kilometres away from our planet (quite close by cosmic standards!). Although it was too faint to see with the unaided eye, it showed up beautifully in telescopic observations and images such as this one.

Further to the right is another colourful object — a small, pink splash, visible just above the horizon adjacent to the comet. This is the Lagoon Nebula, located approximately 5000 light-years from Earth. It can appear grey to an observer using a small  telescope or binoculars because the human eye has poor colour sensitivity at low light levels, but in long-exposure photos its fantastically vibrant colours shine through. The most prominent constellation in this window on the sky is Scorpius (The Scorpion), but its stars are easily outshone by the “whitish” planetary giant Saturn, and the red-hued Mars. The rest of the sky is lit up in a palette of soft colours by natural airglow.

The eerily backlit mountain peak on the left of the frame is Cerro Armazones, the peak upon which the Extremely Large Telescope (ELT) is currently under construction. When the ELT sees first light, it will be the world’s biggest eye on the sky, and is expected to make significant advances in the study of exoplanets, supermassive black holes, the early Universe, and the nature of dark energy and dark matter.