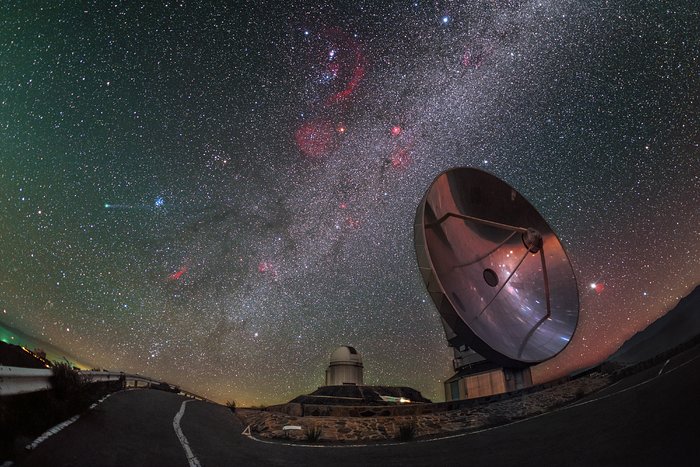 Like most comets, Comet Lovejoy enjoys a long, elliptical and eccentric orbit around the Sun. It entered the inner Solar System for the first recorded time in 2014, and reached perihelion — its closest approach to the Sun — on 30 January 2015. The distance between the Earth and the Sun is defined as 1 astronomical unit (au), or just under 150 million kilometres; Comet Lovejoy came within 1.29 au of our star, placing it between the orbits of Earth and Mars (1.52 au).

This image displays the characteristic soft green glow of the comet, produced as molecules of carbon are heated by the Sun. A tail of material splays out behind the comet’s nucleus, crafted by gas and dust blown from the comet by the wind of charged particles streaming out from the Sun.

This comet is actually the fifth to be discovered by its namesake, Terry Lovejoy, an amateur astronomer based in Queensland, Australia. Lovejoy previously discovered comets C/2007 E2, C/2007 K5, C/2011 W3, and C/2013 R1.