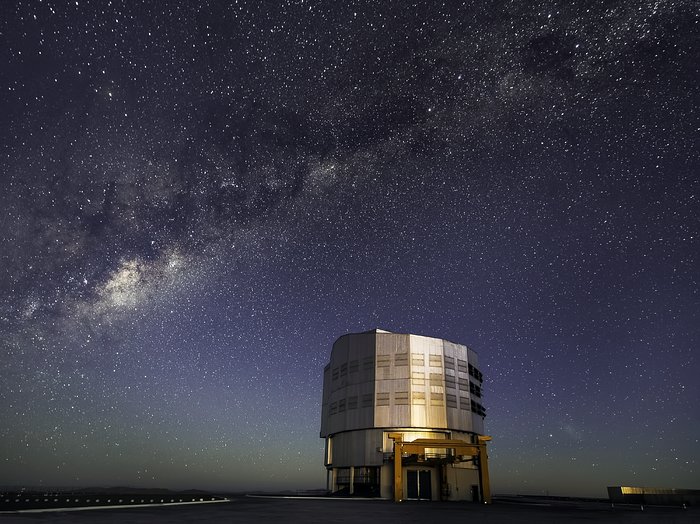 As the Sun sets on the site the Milky Way is shown in magnificent detail. Although it appears to the naked eye as a clouded haze across the sky, the Milky Way consists of 100–400 billion individual stars strung out along its 100 000 light-year extent.

In this image the Milky Way is a backdrop to the Unit Telescope number 4, also known as Yepun. Yepun is Venus in the Mapuche language, the language of the indigenous people from the south of Chile.

Yepun is one of four 8.2-metre telescopes that can be used together as one giant telescope, allowing astronomers to detect details up to 16 times finer than would be possible with the individual telescopes. Together, the VLT has stimulated a new age of discoveries, with several notable scientific firsts, including tracking individual stars moving around the supermassive black hole at the centre of the Milky Way (eso0846).

This image was taken by ESO Photo Ambassador John Colosimo and submitted to the Your ESO Pictures Flickr group. The Flickr group is regularly reviewed and the best photos are selected to be featured in our popular Picture of the Week series, or in our gallery.