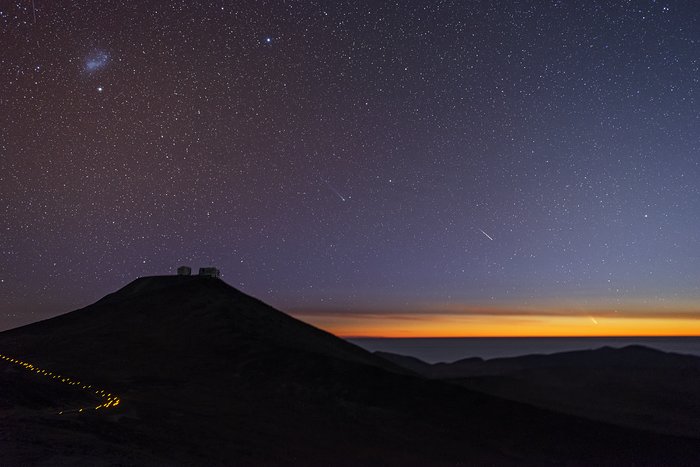 This impressive picture was taken on 5 March 2013 by Gabriel Brammer, one of the ESO Photo Ambassadors, and shows a sunset view of the Paranal Observatory, featuring two comets that are currently moving across the southern skies. Close to the horizon, on the right-hand side of the image, Comet C/2011 L4 (Pan-STARRS), the brightest of the two, shows a bright tail that is caused mainly by dust reflecting the sunlight. In the centre of the image, just above the right-hand slopes of Cerro Paranal, the greenish coma — a nebulous envelope around the nucleus — of Comet C/2012 F6 (Lemmon) can be distinguished, followed by a fainter tail. The green colour is a result of the ionisation of gases in the coma by sunlight. You might even be tricked into thinking that there is a third comet visible in this photo, but the bright object whizzing between comets Lemmon and Pan-STARRS is a serendipitous shooting star burning up in the atmosphere at just the right time and in the right place.