Distant Galaxies Reveal The Clearing of the Cosmic Fog

Scientists have used ESO’s Very Large Telescope to probe the early Universe at several different times as it was becoming transparent to ultraviolet light. This brief but dramatic phase in cosmic history — known as reionisation — occurred around 13 billion years ago. By carefully studying some of the most distant galaxies ever detected, the team has been able to establish a timeline for reionisation for the first time. They have also demonstrated that this phase must have happened quicker than astronomers previously thought.

An international team of astronomers used the VLT as a time machine, to look back into the early Universe and observe several of the most distant galaxies ever detected. They have been able to measure their distances accurately and find that we are seeing them as they were between 780 million and a billion years after the Big Bang [1].

The new observations have allowed astronomers to establish a timeline for what is known as the age of reionisation [2] for the first time. During this phase the fog of hydrogen gas in the early Universe was clearing, allowing ultraviolet light to pass unhindered for the first time.

The new results, which will appear in the Astrophysical Journal, build on a long and systematic search for distant galaxies that the team has carried out with the VLT over the last three years.

“Archaeologists can reconstruct a timeline of the past from the artifacts they find in different layers of soil. Astronomers can go one better: we can look directly into the remote past and observe the faint light from different galaxies at different stages in cosmic evolution,” explains Adriano Fontana, of INAF Rome Astronomical Observatory who led this project. “The differences between the galaxies tell us about the changing conditions in the Universe over this important period, and how quickly these changes were occurring.”

Different chemical elements glow brightly at characteristic colours. These spikes in brightness are known as emission lines. One of the strongest ultraviolet emission lines is the Lyman-alpha line, which comes from hydrogen gas [3]. It is bright and recognisable enough to be seen even in observations of very faint and faraway galaxies.

Spotting the Lyman-alpha line for five very distant galaxies [4] allowed the team to do two key things: first, by observing how far the line had been shifted toward the red end of the spectrum, they were able to determine the galaxies’ distances, and hence how soon after the Big Bang they could see them [5]. This let them place them in order, creating a timeline which shows how the galaxies’ light evolved over time. Secondly, they were able to see the extent to which the Lyman-alpha emission — which comes from glowing hydrogen within the galaxies — was reabsorbed by the neutral hydrogen fog in intergalactic space at different points in time.

“We see a dramatic difference in the amount of ultraviolet light that was blocked between the earliest and latest galaxies in our sample,” says lead author Laura Pentericci of INAF Rome Astronomical Observatory. “When the Universe was only 780 million years old this neutral hydrogen was quite abundant, filling from 10 to 50% of the Universe’ volume. But only 200 million years later the amount of neutral hydrogen had dropped to a very low level, similar to what we see today. It seems that reionisation must have happened quicker than astronomers previously thought.”

As well as probing the rate at which the primordial fog cleared, the team’s observations also hint at the likely source of the ultraviolet light which provided the energy necessary for reionisation to occur. There are several competing theories for where this light came from — two leading candidates are the Universe’s first generation of stars [6], and the intense radiation emitted by matter as it falls towards black holes.

"The detailed analysis of the faint light from two of the most distant galaxies we found suggests that the very first generation of stars may have contributed to the energy output observed," says Eros Vanzella of the INAF Trieste Observatory, a member of the research team. "These would have been very young and massive stars, about five thousand times younger and one hundred times more massive than the Sun, and they may have been able to dissolve the primordial fog and make it transparent."

The highly accurate measurements required to confirm or disprove this hypothesis, and show that the stars can produce the required energy, require observations from space, or from ESO’s planned European Extremely Large Telescope, which will be the world’s largest eye on the sky once completed early next decade.

Studying this early period in cosmic history is technically challenging because accurate observations of extremely distant and faint galaxies are needed, a task which can only be attempted with the most powerful telescopes. For this study, the team used the great light-gathering power of the 8.2-metre VLT to carry out spectroscopic observations, targetting galaxies first identified by the NASA/ESA Hubble Space Telescope and in deep images from the VLT.

[2] At the time the first stars and galaxies formed, the Universe was filled with electrically neutral hydrogen gas, which absorbs ultraviolet light. As the ultraviolet radiation from these early galaxies excited the gas, making it electrically charged (ionised), it gradually became transparent to ultraviolet light. This process is technically known as reionisation, as there is thought to have been a brief period within the first 100 000 years after the Big Bang in which the hydrogen was also ionised.

[3] The team measured the effects of the hydrogen fog using spectroscopy, a technique which involves splitting and spreading out the light from the galaxy into its component colours, much like a prism splits sunlight into a rainbow.

[4] The team used the VLT to study the spectra of 20 candidate galaxies at redshifts close to 7. These come from deep imaging studies of three separate fields. Of these 20 targets five were found to have clearly detected Lyman-alpha emission. This is currently the only set of spectroscopically confirmed galaxies around z=7.

[5] Because the Universe is expanding, the wavelength of light from objects gets stretched as it passes through space. The further light has to travel, the more its wavelength is stretched. As red is the longest wavelength visible to our eyes, the characteristic red colour this gives to extremely distant objects has become known as ‘redshift’. Although it is technically a measure of how the colour of an object’s light has been affected, it is also by extension a measure both of the object’s distance, and of how long after the Big Bang we see it.

This research was presented in a paper “Spectroscopic Confirmation of z∼7 LBGs: Probing the Earliest Galaxies and the Epoch of Reionization”, to appear in the Astrophysical Journal. 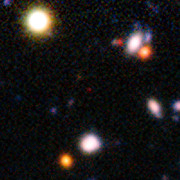 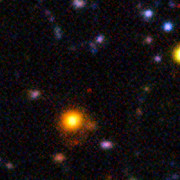 PR Video eso1138a
Animation of artist’s impression of galaxies at the end of the era of reionisation
Send us your comments!
Subscribe to receive news from ESO in your language
Accelerated by CDN77
Terms & Conditions