Today ESO has released a new image of the Trifid Nebula, showing just why it is a firm favourite of astronomers, amateur and professional alike. This massive star factory is so named for the dark dust bands that trisect its glowing heart, and is a rare combination of three nebula types, revealing the fury of freshly formed stars and presaging more star birth.

Smouldering several thousand light-years away in the constellation of Sagittarius (the Archer), the Trifid Nebula presents a compelling portrait of the early stages of a star’s life, from gestation to first light. The heat and “winds” of newly ignited, volatile stars stir the Trifid’s gas and dust-filled cauldron; in time, the dark tendrils of matter strewn throughout the area will themselves collapse and form new stars.

The French astronomer Charles Messier first observed the Trifid Nebula in June 1764, recording the hazy, glowing object as entry number 20 in his renowned catalogue. Observations made about 60 years later by John Herschel of the dust lanes that appear to divide the cosmic cloud into three lobes inspired the English astronomer to coin the name “Trifid”.

Made with the Wide-Field Imager camera attached to the MPG/ESO 2.2-metre telescope at ESO’s La Silla Observatory in northern Chile, this new image prominently displays the different regions of the Trifid Nebula as seen in visible light. In the bluish patch to the upper left, called a reflection nebula, dusty gas scatters the light from nearby, Trifid-born stars. The largest of these stars shines most brightly in the hot, blue portion of the visible spectrum. This, along with the fact that dust grains and molecules scatter blue light more efficiently than red light — a property that explains why we have blue skies and red sunsets — imbues this portion of the Trifid Nebula with an azure hue.

Below, in the round, pink-reddish area typical of an emission nebula, the gas at the Trifid’s core is heated by hundreds of scorching young stars until it emits the red signature light of hydrogen, the major component of the gas, just as hot neon gas glows red-orange in illuminated signs all over the world.

The gases and dust that crisscross the Trifid Nebula make up the third kind of nebula in this cosmic cloud, known as dark nebulae, courtesy of their light-obscuring effects. (The iconic Horsehead Nebula may be the most famous of these). Within these dark lanes, the remnants of previous star birth episodes continue to coalesce under gravity’s inexorable attraction. The rising density, pressure and temperature inside these gaseous blobs will eventually trigger nuclear fusion, and yet more stars will form.

In the lower part of this emission nebula, a finger of gas pokes out from the cloud, pointing directly at the central star powering the Trifid. This is an example of an evaporating gaseous globule, or "EGG", also seen in the Eagle Nebula, another star-forming region. At the tip of the finger, which was photographed by Hubble, a knot of dense gas has resisted the onslaught of radiation from the massive star. 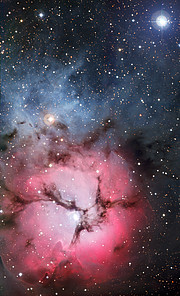 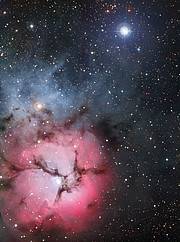 PR Video eso0930a
Zoom in to the Trifid Nebula
Send us your comments!
Subscribe to receive news from ESO in your language
Accelerated by CDN77
Terms & Conditions