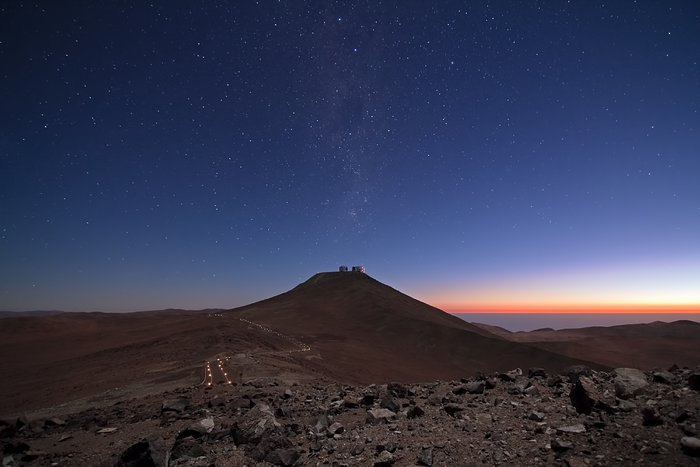 On a cold dark night on Mars, in the middle of an arid desert, a narrow road lit by artificial lights winds its way up to a lonely human outpost on the top of an old mountain. Or at least, that’s what a science fiction fan might make of this almost unearthly view.

The photograph actually shows ESO’s Paranal Observatory, home to the Very Large Telescope (VLT), on Earth. Nevertheless, it’s easy to imagine it as a future view of Mars, perhaps at the end of the century. Which is why Julien Girard, who took this photograph, calls it “Mars 2099”.

Located at 2600 metres altitude, ESO’s Paranal Observatory sits in one of the driest and most desolate areas on Earth, in Chile’s Atacama Desert. The landscape is so Martian, in fact, that the European Space Agency (ESA) and NASA test their Mars rovers in this region. For example, an ESA team recently tested the self-steering Seeker rover, as described in ann12048.

This image was taken at twilight, looking southwest towards the VLT, from the VISTA survey telescope on an adjacent peak. To the west lies the Pacific Ocean, only about 12 kilometres from Paranal. Rising up from the Paranal summit, the Milky Way can be seen, bearing the unmistakable mark of the southern sky — the asterism of the Southern Cross.

At Paranal, the skies can be so clear and dark on moonless nights, that the light from the Milky Way alone is enough to cast shadows. This is why ESO chose the site for the VLT, and why the observatory benefits from some of the best observing conditions in the world.

Julien Girard is an ESO astronomer based in Chile, who works at the VLT. He submitted this photograph to the Your ESO Pictures Flickr group. The Flickr group is regularly reviewed and the best photos are selected to be featured in our popular Picture of the Week series, or in our gallery. In 2012, as part of ESO’s 50th anniversary year, we are also welcoming your historical ESO-related images.