Outbursts from a newborn star 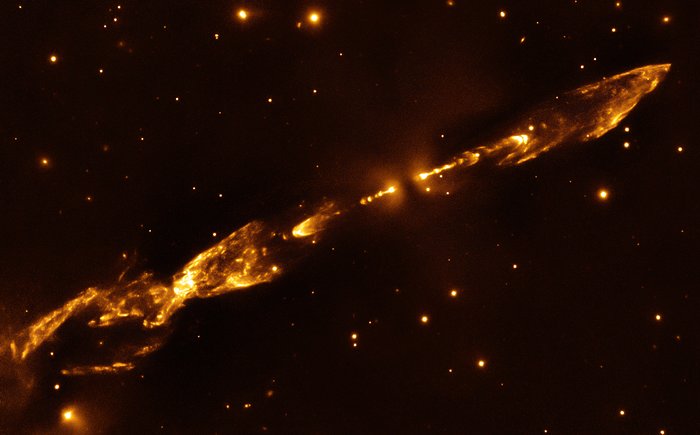 The object lies in the constellation of Orion (The Hunter) in a dense molecular star-forming region, not far from the famous Horsehead Nebula. In regions like this, clouds of dust and gas collapse under the force of gravity, spinning faster and faster and becoming hotter and hotter until a young star ignites at the cloud’s centre. Any leftover material swirling around the newborn protostar comes together to form an accretion disc that will, under the right circumstances, eventually evolve to form the base material for the creation of planets, asteroids and comets.

Although this process is still not fully understood, it is common that a protostar and its accretion disc, as seen here edge-on, are the cause of the jets in this image. The star at the centre of HH 212 is indeed a very young star, at only a few thousand years old. Its jets are remarkably symmetric, with several knots appearing at relatively stable intervals. This stability suggests that the jet pulses vary quite regularly, and over a short timescale — maybe even as short as 30 years! Further out from the centre, large bow shocks spread out into interstellar space, caused by ejected gas colliding with dust and gas at speeds of several hundred kilometres per second.