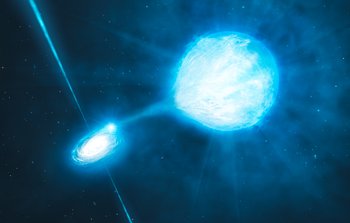 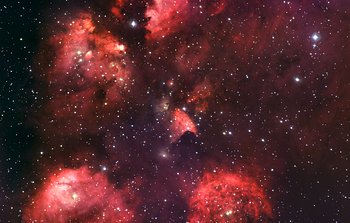 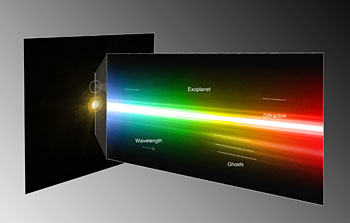 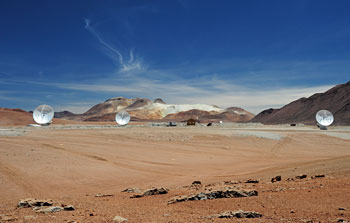 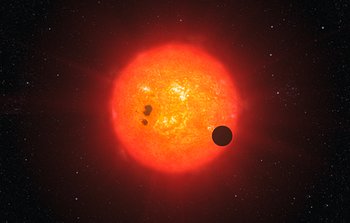 eso0950 — Fréttatilkynning
Astronomers Find World with Thick, Inhospitable Atmosphere and an Icy Heart
16. desember 2009: Astronomers have discovered the second super-Earth exoplanet [1] for which they have determined the mass and radius, giving vital clues about its structure. It is also the first super-Earth where an atmosphere has been found. The exoplanet, orbiting a small star only 40 light-years away from us, opens up dramatic new perspectives in the quest for habitable worlds. The planet, GJ1214b, has a mass about six times that of Earth and its interior is likely to be mostly made of water ice. Its surface appears to be fairly hot and the planet is surrounded by a thick atmosphere, which makes it inhospitable for life as we know it on Earth.
Lesa meira 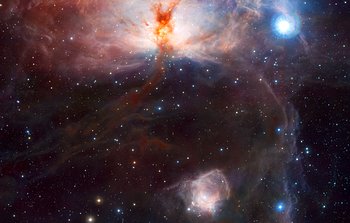 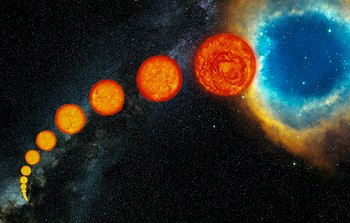 eso0948 — Fréttatilkynning
Brightness Variations of Sun-like Stars: The Mystery Deepens
7. desember 2009: An extensive study made with ESO’s Very Large Telescope deepens a long-standing mystery in the study of stars similar to the Sun. Unusual year-long variations in the brightness of about one third of all Sun-like stars during the latter stages of their lives still remain unexplained. Over the past few decades, astronomers have offered many possible explanations, but the new, painstaking observations contradict them all and only deepen the mystery. The search for a suitable interpretation is on.
Lesa meira 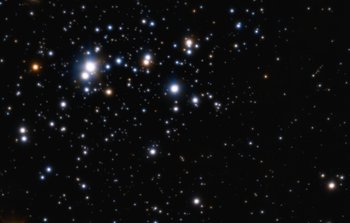 eso0947 — Fréttatilkynning
Stellar Family Portrait Takes Imaging Technique to New Extremes
3. desember 2009: The young star cluster Trumpler 14 is revealed in another stunning ESO image. The amount of exquisite detail seen in this portrait, which beautifully reveals the life of a large family of stars, is due to the Multi-conjugate Adaptive optics Demonstrator (MAD) on ESO’s Very Large Telescope. Never before has such a large patch of sky been imaged using adaptive optics [1], a technique by which astronomers are able to remove most of the atmosphere's blurring effects.
Lesa meira 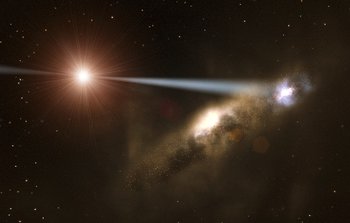 eso0946 — Fréttatilkynning
Black Hole Caught Zapping Galaxy into Existence?
30. nóvember 2009: Which come first, the supermassive black holes that frantically devour matter or the enormous galaxies where they reside? A brand new scenario has emerged from a recent set of outstanding observations of a black hole without a home: black holes may be “building” their own host galaxy. This could be the long-sought missing link to understanding why the masses of black holes are larger in galaxies that contain more stars.
Lesa meira 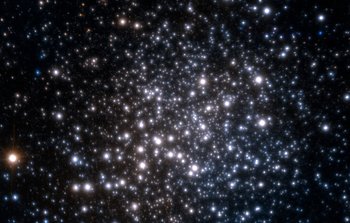 eso0945 — Fréttatilkynning
Cosmic "Dig" Reveals Vestiges of the Milky Way's Building Blocks
25. nóvember 2009: Peering through the thick dust clouds of our galaxy’s "bulge" (the myriads of stars surrounding its centre), and revealing an amazing amount of detail, a team of astronomers has unveiled an unusual mix of stars in the stellar grouping known as Terzan 5. Never observed anywhere in the bulge before, this peculiar "cocktail" of stars suggests that Terzan 5 is in fact one of the bulge's primordial building blocks, most likely the relic of a proto-galaxy that merged with the Milky Way during its very early days.
Lesa meira 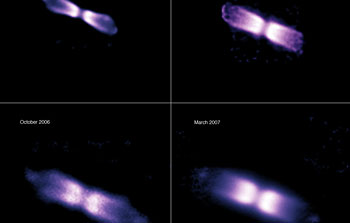 eso0943 — Fréttatilkynning
Ticking Stellar Time Bomb Identified
17. nóvember 2009: Using ESO’s Very Large Telescope and its ability to obtain images as sharp as if taken from space, astronomers have made the first time-lapse movie of a rather unusual shell ejected by a “vampire star”, which in November 2000 underwent an outburst after gulping down part of its companion’s matter. This enabled astronomers to determine the distance and intrinsic brightness of the outbursting object. It appears that this double star system is a prime candidate to be one of the long-sought progenitors of the exploding stars known as Type Ia supernovae, critical for studies of dark energy.
Lesa meira 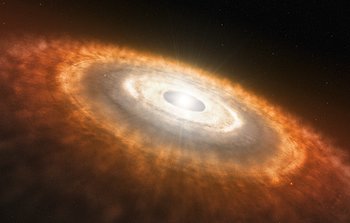 eso0942 — Fréttatilkynning
Exoplanets Clue to Sun's Curious Chemistry
11. nóvember 2009: A ground-breaking census of 500 stars, 70 of which are known to host planets, has successfully linked the long-standing “lithium mystery” observed in the Sun to the presence of planetary systems. Using ESO’s successful HARPS spectrograph, a team of astronomers has found that Sun-like stars that host planets have destroyed their lithium much more efficiently than “planet-free” stars. This finding does not only shed light on the lack of lithium in our star, but also provides astronomers with a very efficient way of finding stars with planetary systems.
Lesa meira 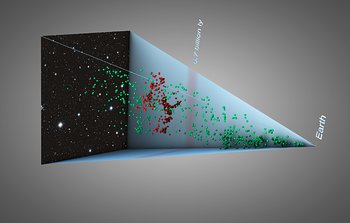 eso0941 — Fréttatilkynning
Shedding Light on the Cosmic Skeleton
3. nóvember 2009: Astronomers have tracked down a gigantic, previously unknown assembly of galaxies located almost seven billion light-years away from us. The discovery, made possible by combining two of the most powerful ground-based telescopes in the world, is the first observation of such a prominent galaxy structure in the distant Universe, providing further insight into the cosmic web and how it formed.
Lesa meira 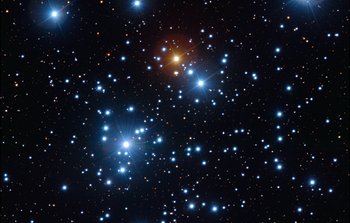 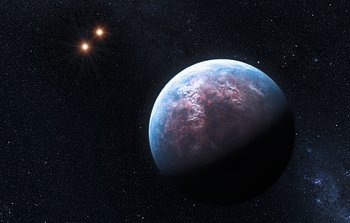 eso0939 — Fréttatilkynning
32 New Exoplanets Found
19. október 2009: Today, at an international ESO/CAUP exoplanet conference in Porto, the team who built the High Accuracy Radial Velocity Planet Searcher, better known as HARPS, the spectrograph for ESO's 3.6-metre telescope, reports on the incredible discovery of some 32 new exoplanets, cementing HARPS's position as the world’s foremost exoplanet hunter. This result also increases the number of known low-mass planets by an impressive 30%. Over the past five years HARPS has spotted more than 75 of the roughly 400 or so exoplanets now known.
Lesa meira 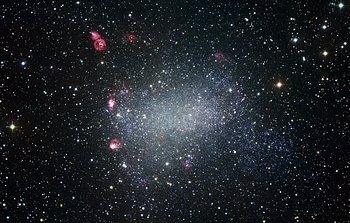 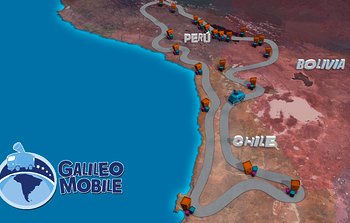 eso0937 — Fréttatilkynning
The GalileoMobile starts its South American voyage
5. október 2009: Today marks the beginning of the GalileoMobile Project, a two-month expedition to bring the wonder and excitement of astronomy to young people in Chile, Bolivia and Peru. Supported by ESO and partners, a group of astronomers and educators will travel through a region of the Andes Mountains aboard the GalileoMobile, offering astronomical activities, such as workshops for students and star parties for the general public. Professional filmmakers on the trip will produce a multilingual documentary capturing the thrill of discovery through science, culture and travel.
Lesa meira 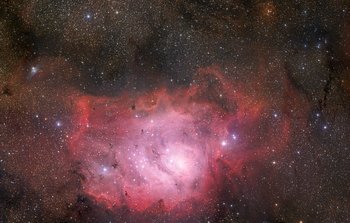