A very bright burst of gamma-rays was observed on March 29, 2003 by NASA's High Energy Transient Explorer (HETE-II) , in a sky region within the constellation Leo. Within 90 min, a new, very bright light source (the "optical afterglow") was detected in the same direction by means of a 40-inch telescope at the Siding Spring Observatory (Australia) and also in Japan. The gamma-ray burst was designated GRB 030329 , according to the date. And within 24 hours, a first, very detailed spectrum of this new object was obtained by the UVES high-dispersion spectrograph on the 8.2-m VLT KUEYEN telescope at the ESO Paranal Observatory (Chile). It allowed to determine the distance as about 2,650 million light-years (redshift 0.1685). Continued observations with the FORS1 and FORS2 multi-mode instruments on the VLT during the following month allowed an international team of astronomers [1] to document in unprecedented detail the changes in the spectrum of the optical afterglow of this gamma-ray burst . Their detailed report appears in the June 19 issue of the research journal "Nature". The spectra show the gradual and clear emergence of a supernova spectrum of the most energetic class known, a "hypernova" . This is caused by the explosion of a very heavy star - presumably over 25 times heavier than the Sun. The measured expansion velocity (in excess of 30,000 km/sec) and the total energy released were exceptionally high, even within the elect hypernova class. From a comparison with more nearby hypernovae, the astronomers are able to fix with good accuracy the moment of the stellar explosion. It turns out to be within an interval of plus/minus two days of the gamma-ray burst. This unique conclusion provides compelling evidence that the two events are directly connected. These observations therefore indicate a common physical process behind the hypernova explosion and the associated emission of strong gamma-ray radiation. The team concludes that it is likely to be due to the nearly instantaneous, non-symmetrical collapse of the inner region of a highly developed star (known as the "collapsar" model). The March 29 gamma-ray burst will pass into the annals of astrophysics as a rare "type-defining event", providing conclusive evidence of a direct link between cosmological gamma-ray bursts and explosions of very massive stars.

One of the currently most active fields of astrophysics is the study of the dramatic events known as "gamma-ray bursts (GRBs)" . They were first detected in the late 1960's by sensitive instruments on-board orbiting military satellites, launched for the surveillance and detection of nuclear tests. Originating, not on the Earth, but far out in space, these short flashes of energetic gamma-rays last from less than a second to several minutes.

Despite major observational efforts, it is only within the last six years that it has become possible to pinpoint with some accuracy the sites of some of these events. With the invaluable help of comparatively accurate positional observations of the associated X-ray emission by various X-ray satellite observatories since early 1997, astronomers have until now identified about fifty short-lived sources of optical light associated with GRBs (the "optical afterglows").

Most GRBs have been found to be situated at extremely large ("cosmological") distances. This implies that the energy released in a few seconds during such an event is larger than that of the Sun during its entire lifetime of more than 10,000 million years. The GRBs are indeed the most powerful events since the Big Bang known in the Universe.

During the past years circumstantial evidence has mounted that GRBs signal the collapse of massive stars. This was originally based on the probable association of one unusual gamma-ray burst with a supernova ("SN 1998bw", also discovered with ESO telescopes). More clues have surfaced since, including the association of GRBs with regions of massive star-formation in distant galaxies, tantalizing evidence of supernova-like light-curve "bumps" in the optical afterglows of some earlier bursts, and spectral signatures from freshly synthesized elements, observed by X-ray observatories.

On March 29, 2003 (at exactly 11:37:14.67 hrs UT) NASA's High Energy Transient Explorer (HETE-II) detected a very bright gamma-ray burst. Following identification of the "optical afterglow" by a 40-inch telescope at the Siding Spring Observatory (Australia), the redshift of the burst [3] was determined as 0.1685 by means of a high-dispersion spectrum obtained with the UVES spectrograph at the 8.2-m VLT KUEYEN telescope at the ESO Paranal Observatory (Chile).

The corresponding distance is about 2,650 million light-years. This is the nearest normal GRB ever detected, therefore providing the long-awaited opportunity to test the many hypotheses and models which have been proposed since the discovery of the first GRBs in the late 1960's.

With this specific aim, the ESO-lead team of astronomers [1] now turned to two other powerful instruments at the ESO Very Large Telescope (VLT), the multi-mode FORS1 and FORS2 camera/spectrographs. Over a period of one month, until May 1, 2003, spectra of the fading object were obtained at regular rate, securing a unique set of observational data that documents the physical changes in the remote object in unsurpassed detail.

Based on a careful study of these spectra, the astronomers are now presenting their interpretation of the GRB 030329 event in a research paper appearing in the international journal "Nature" on Thursday, June 19. Under the prosaic title "A very energetic supernova associated with the gamma-ray burst of 29 March 2003", no less than 27 authors from 17 research institutes, headed by Danish astronomer Jens Hjorth conclude that there is now irrefutable evidence of a direct connection between the GRB and the "hypernova" explosion of a very massive, highly evolved star.

This is based on the gradual "emergence" with time of a supernova-type spectrum, revealing the extremely violent explosion of a star. With velocities well in excess of 30,000 km/sec (i.e., over 10% of the velocity of light), the ejected material is moving at record speed, testifying to the enormous power of the explosion.

Hypernovae are rare events and they are probably caused by explosion of stars of the so-called "Wolf-Rayet" type [4]. These WR-stars were originally formed with a mass above 25 solar masses and consisted mostly of hydrogen. Now in their WR-phase, having stripped themselves of their outer layers, they consist almost purely of helium, oxygen and heavier elements produced by intense nuclear burning during the preceding phase of their short life.

"We have been waiting for this one for a long, long time ", says Jens Hjorth, " this GRB really gave us the missing information. From these very detailed spectra, we can now confirm that this burst and probably other long gamma-ray bursts are created through the core collapse of massive stars. Most of the other leading theories are now unlikely."

His colleague, ESO-astronomer Palle Møller, is equally content: "What really got us at first was the fact that we clearly detected the supernova signatures already in the first FORS-spectrum taken only four days after the GRB was first observed - we did not expect that at all. As we were getting more and more data, we realised that the spectral evolution was almost completely identical to that of the hypernova seen in 1998. The similarity of the two then allowed us to establish a very precise timing of the present supernova event."

The astronomers determined that the hypernova explosion (designated SN 2003dh [2]) documented in the VLT spectra and the GRB-event observed by HETE-II must have occurred at very nearly the same time. Subject to further refinement, there is at most a difference of 2 days, and there is therefore no doubt whatsoever, that the two are causally connected.

"Supernova 1998bw whetted our appetite, but it took 5 more years before we could confidently say, we found the smoking gun that nailed the association between GRBs and SNe" adds Chryssa Kouveliotou of NASA. "GRB 030329 may well turn out to be some kind of 'missing link' for GRBs."

In conclusion, GRB 030329 was a rare "type-defining" event that will be recorded as a watershed in high-energy astrophysics.

Here is the complete story about GRB 030329, as the astronomers now read it.

Thousands of years prior to this explosion, a very massive star, running out of hydrogen fuel, let loose much of its outer envelope, transforming itself into a bluish Wolf-Rayet star [3]. The remains of the star contained about 10 solar masses worth of helium, oxygen and heavier elements.

In the years before the explosion, the Wolf-Rayet star rapidly depleted its remaining fuel. At some moment, this suddenly triggered the hypernova/gamma-ray burst event. The core collapsed, without the outer part of the star knowing. A black hole formed inside, surrounded by a disk of accreting matter. Within a few seconds, a jet of matter was launched away from that black hole.

The jet passed through the outer shell of the star and, in conjunction with vigorous winds of newly formed radioactive nickel-56 blowing off the disk inside, shattered the star. This shattering, the hypernova, shines brightly because of the presence of nickel. Meanwhile, the jet plowed into material in the vicinity of the star, and created the gamma-ray burst which was recorded some 2,650 million years later by the astronomers on Earth. The detailed mechanism for the production of gamma rays is still a matter of debate but it is either linked to interactions between the jet and matter previously ejected from the star, or to internal collisions inside the jet itself.

This scenario represents the "collapsar" model, introduced by American astronomer Stan Woosley (University of California, Santa Cruz) in 1993 and a member of the current team, and best explains the observations of GRB 030329.

"This does not mean that the gamma-ray burst mystery is now solved", says Woosley . "We are confident now that long bursts involve a core collapse and a hypernova, likely creating a black hole. We have convinced most skeptics. We cannot reach any conclusion yet, however, on what causes the short gamma-ray bursts, those under two seconds long."

[3]: In astronomy, the "redshift" denotes the fraction by which the lines in the spectrum of an object are shifted towards longer wavelengths. Since the redshift of a cosmological object increases with distance, the observed redshift of a remote galaxy also provides an estimate of its distance. 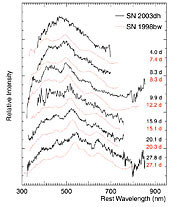