Behind the scenes at ESO: Showing you the road to the stars
What you’ll discover in this blog post:
In a laboratory at ESO headquarters, there is a setup of optics, lenses and mirrors aiding the development of the Extremely Large Telescope — the Miniscule ELT, otherwise known as the MELT. Set to test and validate key elements of the ELT, ESO’s upcoming flagship telescope, the MELT serves as a proving ground to learn valuable lessons for commissioning — setting up and operating — the ELT.

“The MELT has been built to fail and to learn from those failures ahead of the completion of the ELT,” says Carlos Diaz Cano, MELT software engineer and project manager.

The ELT will be the world’s largest optical and near-infrared telescope with a 39-metre main mirror, the largest of a five mirror setup, and is set to push the boundaries of astrophysical research. For such an ambitious project, it is useful to be able to test specific elements of the telescope and how they interact before it is operational. Scaling down the entirety of the ELT to fit in a lab bench barely six square-metres in area would be a near-impossible task. Instead the MELT emulates only specific components of the ELT with the light passed via four different mirrors connected in a “telescope optical path”.

Light reflects in five different mirrors in its journey through the ELT.
Credit: ESO/L. Calçada/ACe Consortium

One of the highlight features of the ELT is its main mirror, M1, composed of 798 hexagonal segments, with each segment measuring 1.4 metres across and just 5 cm thick. The M1 analogue on the MELT is composed instead of 61 segments, in total measuring just 153 mm across. This analogue mirror was incorporated from a previous ESO experiment, the Active Phasing Experiment, which was done at ESO's Paranal Observatory and tested the control of segmented primary mirrors for the ELT. After this experiment returned from Paranal, the engineers at ESO headquarters incorporated adaptive optics and additional optical components. With a few additional changes in hardware and almost completely new software and electronic infrastructure, this system is now known as MELT. 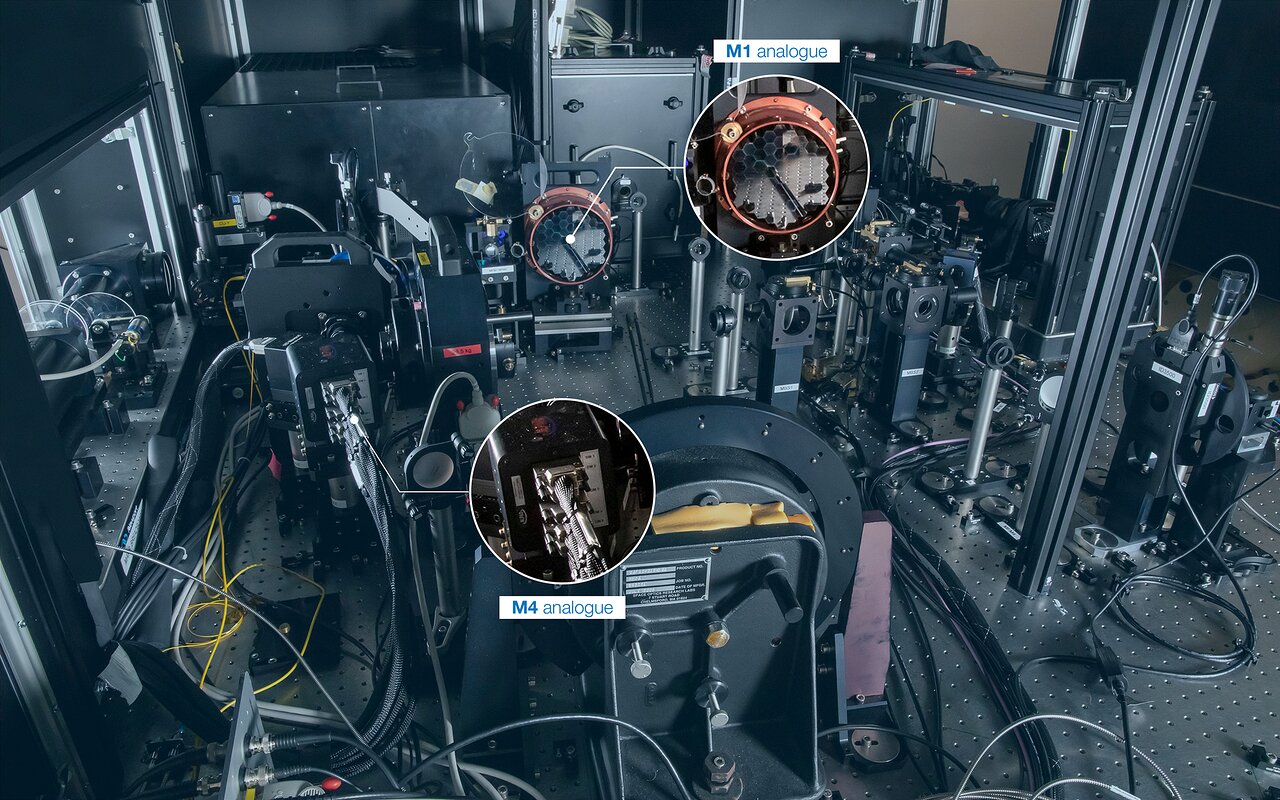 The optical setup which comprises the MELT. Highlighted are the analogues for the M1 and M4 mirrors.
Credit: ESO 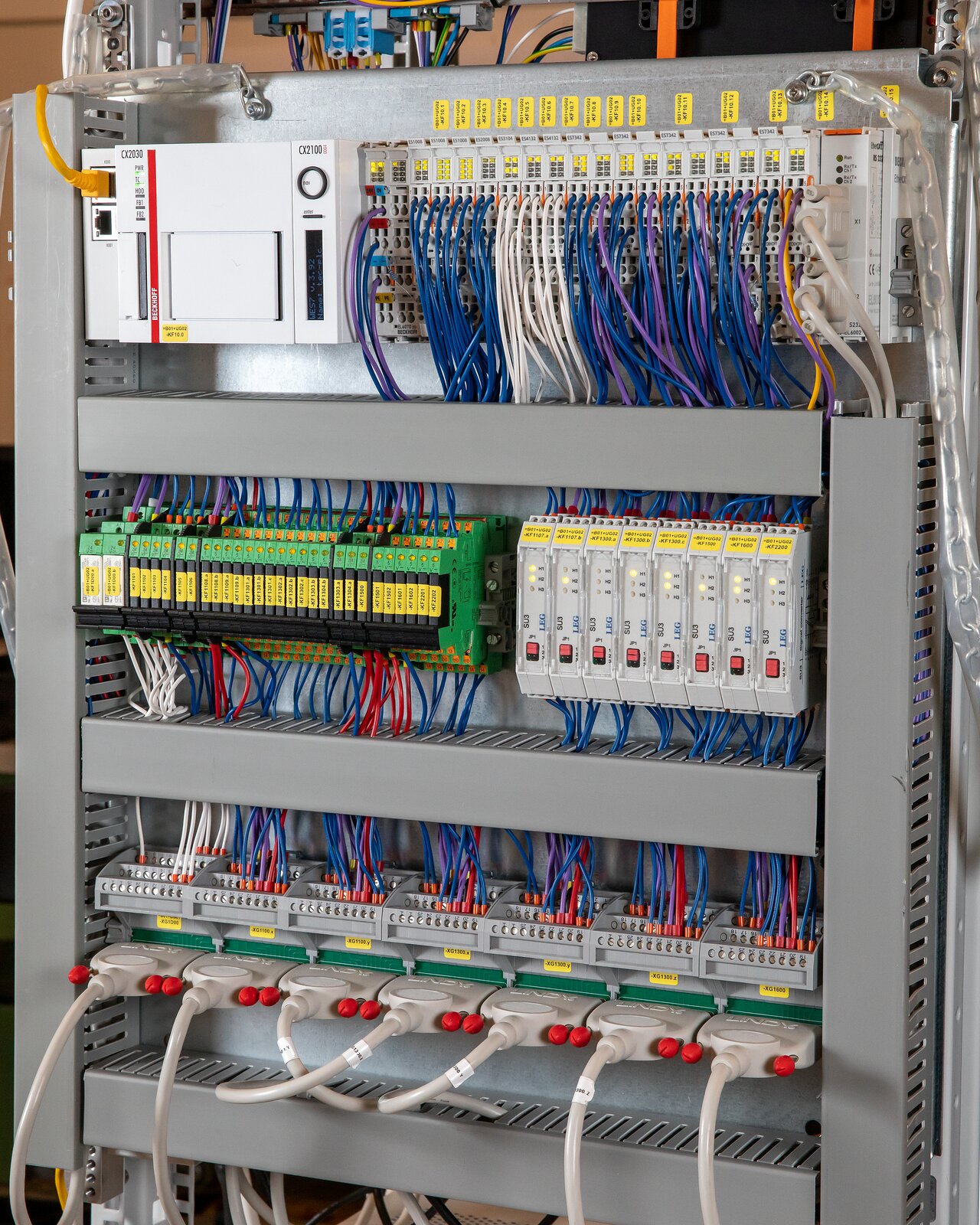 A number of control modules for the MELT controlling several telescope features including motors, light sources, and M5 switches.
Credit: ESO
"Sixty one segments are understandably easier to work with than 798, and give us an idea of the challenges we’ll face with the ELT"

“Sixty one segments are understandably easier to work with than 798, and give us an idea of the challenges we’ll face with the ELT,” says Pascaline Darré, optical engineer for the MELT. “But we have to bear in mind that the ELT will be different because it’s on another scale.”

While there are fewer segments on the MELT’s M1 analogue, there is still a substantial amount of work involved in operating them. Each segment needs to move independently to ensure perfect co-alignment of all the segments, enabling them to behave as a single larger mirror — for both the ELT and the MELT. The movement of these segments is managed by control software. An overarching challenge the MELT team are facing is the development and integration of control systems for the miniaturised telescope.

“The control system is the ‘glue’ that joins all the components together,” says Diaz Cano. “Every bug we fix now is time saved for the ELT in the future.”

"Every bug we fix now is time saved for the ELT in the future."

“Aside from using the software for MELT, we plan to develop a set of software libraries which will actually be available for use on the ELT,” explains Diaz Cano.

On the ELT, M2 reflects the light from M1 to M3 allowing the light to continue on its path between mirrors before being captured by scientific instruments. Although MELT simulates the ELT, its optical design is not identical, and it does not have a M3 mirror. Instead, MELT’s M2 analogue is a special lens assembly that emulates the ELT's M2 and can also intentionally generate optical aberrations (such as astigmatism). These aberrations blur and distort images, allowing engineers to learn how to correct them on the ELT. 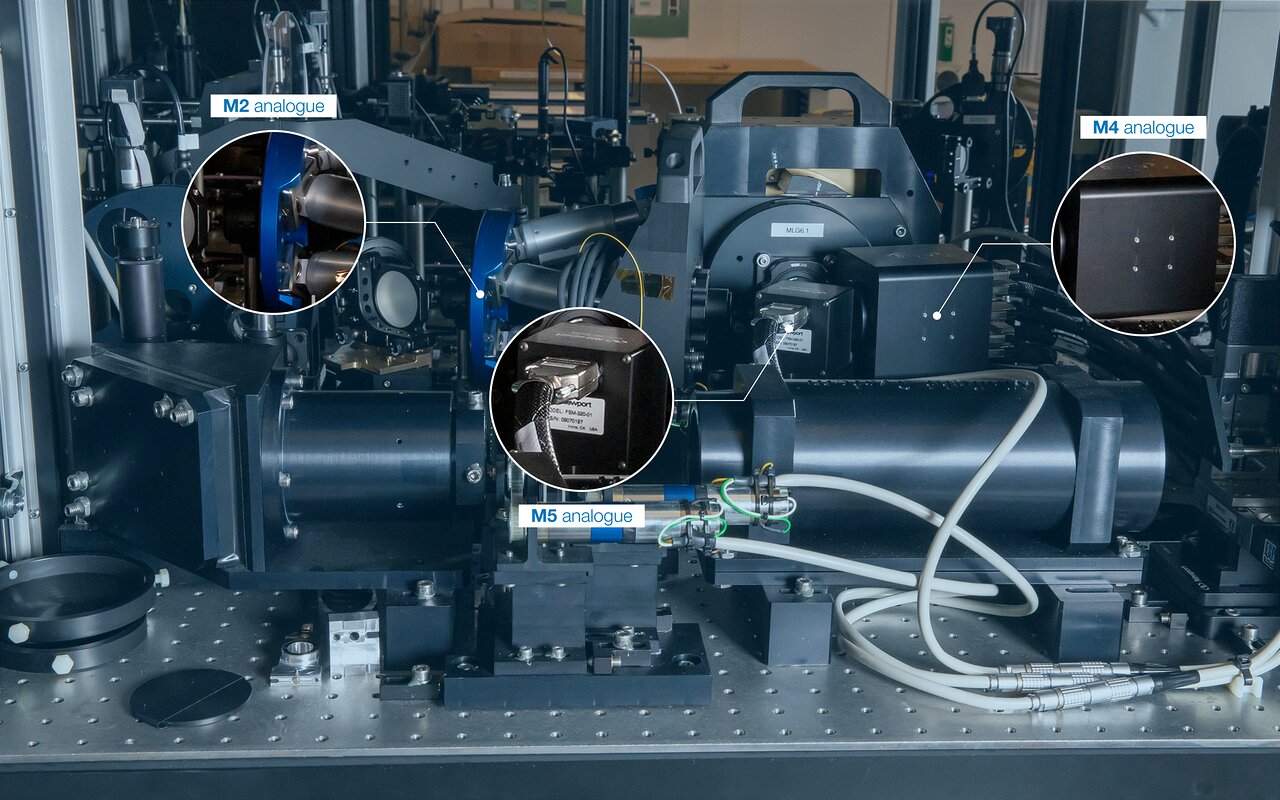 M2 is composed of two lens groups with one mounted on a hexapod, a component which can provide multi-axis motion for precise optical alignment.
Credit: ESO

Next up is M4, a deformable mirror whose surface can be distorted and adapted to help correct for atmospheric turbulence and the vibration of the telescope itself, enabling sharp images to be captured. On the ELT, the adjustment of M4’s surface is controlled by 5352 actuators, ‘movers’ allowing the mirror to change shape. The real-time controller is responsible for adjusting these actuators so the shape of M4 can be tweaked up to 1000 times a second to compensate for atmospheric changes. The MELT’s M4 analogue has 277 actuators controlled by a real-time controller similar to the one which will be deployed on the ELT. With this the MELT team can test and validate what they call “offloading strategies”, for example to find ways in which M4 and the fifth mirror, M5, can work together to correct and align their positions and improve images.

The MELT team are testing ways in which mirrors can work together to correct and align their positions, which is key to high quality images.

M5 is a fast tip-tilt mirror and operates jointly with M4 as part of the ELT’s adaptive optics systems. Adaptive optics, which also operates on ESO’s Very Large Telescope, allows corrections for atmospheric turbulence and is key to producing sharp images from the ground. The MELT’s M5 analogue is also a fast tip-tilt mirror, albeit much smaller with a diameter of just 50.8 mm, and is the final component of the optical path emulated on the MELT.

The MELT’s telescope optical path emulates the path light will take on the ELT to capture scientific observations. The other half of the MELT’s optical setup contains the diagnostic optical path that helps check that the captured light is not distorted in the telescope, maintaining the quality of observations.

The diagnostic optical path emulates the Phasing and Diagnostic Station on the ELT whose primary goal is to ensure that M1 continues to act as one giant mirror by keeping the segments of M1 aligned to a precision of tens of nanometres. Changes in temperature and humidity mean M1 is expected to drift out of phase over time, so the Phasing and Diagnostic Station measures the shape of M1 and updates segment positions to maintain the optimum mirror shape and keep delivering clear and sharp images. These drifts are detected by wavefront sensors, which measure whether light reflected on different segments of M1 comes together in phase to ensure the telescope is working as intended.

“The diagnostic optical path is populated with different wavefront sensors which can test different phasing strategies. The different steps to get M1 phased are tested in order to validate the strategy for the ELT,” explains Darré. 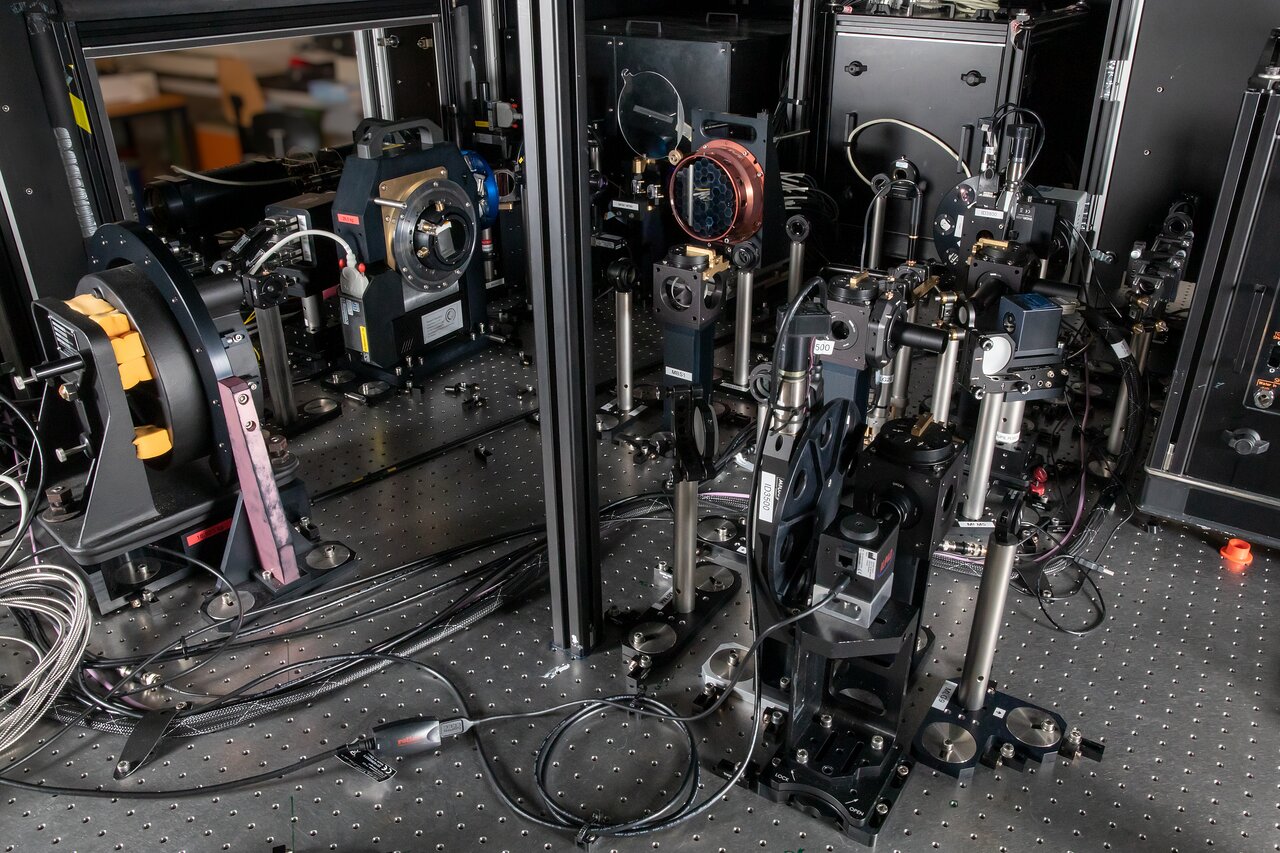 Parts of the diagnostic optical path can be seen in the right hand side of this image. After travelling through the emulated telescope, the light is directed towards the back of the optical table where there is space available for various wavefront sensors.
Credit: ESO
"We are trying to put in place as much as possible for when the ELT is operational. There’s huge added value for the engineers commissioning the ELT if they are familiar with the challenges they may face."

Getting ready for the ELT

MELT is used to develop control strategies and to help validate software that will be used for the ELT and its diagnostic station once they are ready to go on-sky. A benefit of deploying these sensors on a test bench early on is that engineers can look for answers to technical questions such as, if a wavefront sensor stops working, is there a way to check M1 is still operating as intended? This means they will be able to work more effectively when the ELT launches.

“We are trying to put in place as much as possible for when the ELT is operational. There’s huge added value for the engineers working in commissioning the ELT if they are able to start using the software now, and are familiar with the technology and control challenges they may face down the line,” says Diaz Cano. 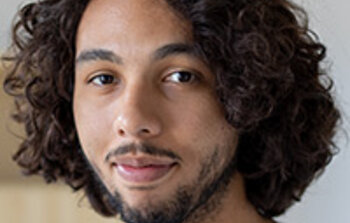 Justin Tabbett is a former science journalism intern at ESO. Before working at ESO, Justin completed an MSci in Physics with Industrial Experience from the University of Bristol, and spent a year working for ISIS Neutron and Muon Source and the Central Laser Facility as a Science Communicator.