New Webcams for ALMA and Paranal

New high-definition cameras have been installed at ESO’s Very Large Telescope (VLT) and at the Atacama Large Millimeter/submillimeter Array (ALMA). They will provide improved 24/7 interactive views of these two flagship observatories in Chile and will complement ESO’s suite of existing live webcam views..

The new cameras provide a live 360-degree view of the activities at the observatories throughout the year and can be used interactively to explore the site in all directions in exquisite detail. In addition, there are several high-resolution “points of interest”, which include a dedicated feed of the Cerro Armazones mountain in Chile — the site of the new European Extremely Large Telescope (E-ELT) — to document the construction of the world’s largest optical telescope, scheduled for completion in 2024. Also shown are the operations of the smaller Auxiliary Telescopes at Paranal, and, on very clear days, the Llullaillaco volcano can be seen, at a distance of 190 km on the Chilean border with Argentina. At the ALMA site, antennas from ESO, North America (USA and Canada) and East Asia (Japan, Taiwan, and Republic of Korea) can be appreciated as well as the APEX telescope in the background. Geographical wonders are also visible in these images: the Licancabur stratovolcano and the curious, blade-like snow formations, known as penitentes, that form only at the high altitudes where ALMA is located.

The cameras are so sensitive that the night sky over Paranal and ALMA can be experienced as one would see it on site. At times the bright yellow laser beams from the VLT’s Adaptive Optics can be seen firing high up into the atmosphere.

The new cameras also break new ground by providing the world’s first live observatory views:  ALMA and Paranal are presented in razor-sharp 4k fish-eye images for use in planetariums around the world, including the upcoming ESO Supernova Planetarium & Visitor Centre in Germany.

The cameras have been provided by Apical. Based in France, Apical is a high-tech company specialising in innovative solutions for wide-field and high-resolution imaging and for network connectivity in extreme, challenging places. 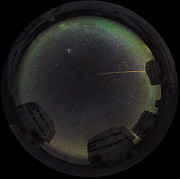 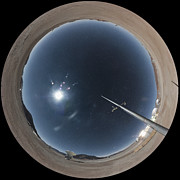