Spectacular improvement in the sharpness of MUSE images

The Unit Telescope 4 (Yepun) of ESO’s Very Large Telescope (VLT) has now been transformed into a fully adaptive telescope. After more than a decade of planning, construction and testing, the new Adaptive Optics Facility (AOF) has seen first light with the instrument MUSE, capturing amazingly sharp views of planetary nebulae and galaxies. The coupling of the AOF and MUSE forms one of the most advanced and powerful technological systems ever built for ground-based astronomy.

The Adaptive Optics Facility (AOF) is a long-term project on ESO’s Very Large Telescope (VLT) to provide an adaptive optics system for the instruments on Unit Telescope 4 (UT4), the first of which is MUSE (the Multi Unit Spectroscopic Explorer) [1]. Adaptive optics works to compensate for the blurring effect of the Earth’s atmosphere, enabling MUSE to obtain much sharper images and resulting in twice the contrast previously achievable. MUSE can now study even fainter objects in the Universe.

“Now, even when the weather conditions are not perfect, astronomers can still get superb image quality thanks to the AOF,” explains Harald Kuntschner, AOF Project Scientist at ESO.

Following a battery of tests on the new system, the team of astronomers and engineers were rewarded with a series of spectacular images. Astronomers were able to observe the planetary nebulae IC 4406, located in the constellation Lupus (The Wolf), and NGC 6369, located in the constellation Ophiuchus (The Serpent Bearer). The MUSE observations using the AOF showed dramatic improvements in the sharpness of the images, revealing never before seen shell structures in IC 4406 [2].

The AOF, which made these observations possible, is composed of many parts working together. They include the Four Laser Guide Star Facility (4LGSF) and the very thin deformable secondary mirror of UT4 [3] [4]. The 4LGSF shines four 22-watt laser beams into the sky to make sodium atoms in the upper atmosphere glow, producing spots of light on the sky that mimic stars. Sensors in the adaptive optics module GALACSI (Ground Atmospheric Layer Adaptive Corrector for Spectroscopic Imaging) use these artificial guide stars to determine the atmospheric conditions.

One thousand times per second, the AOF system calculates the correction that must be applied to change the shape of the telescope’s deformable secondary mirror to compensate for atmospheric disturbances. In particular, GALACSI corrects for the turbulence in the layer of atmosphere up to one kilometre above the telescope. Depending on the conditions, atmospheric turbulence can vary with altitude, but studies have shown that the majority of atmospheric disturbance occurs in this “ground layer” of the atmosphere.

“The AOF system is essentially equivalent to raising the VLT about 900 metres higher in the air, above the most turbulent layer of atmosphere,” explains Robin Arsenault, AOF Project Manager. “In the past, if we wanted sharper images, we would have had to find a better site or use a space telescope — but now with the AOF, we can create much better conditions right where we are, for a fraction of the cost!”

The corrections applied by the AOF rapidly and continuously improve the image quality by concentrating the light to form sharper images, allowing MUSE to resolve finer details and detect fainter stars than previously possible. GALACSI currently provides a correction over a wide field of view, but this is only the first step in bringing adaptive optics to MUSE. A second mode of GALACSI is in preparation and is expected to see first light early 2018. This narrow-field mode will correct for turbulence at any altitude, allowing observations of smaller fields of view to be made with even higher resolution.

“Sixteen years ago, when we proposed building the revolutionary MUSE instrument, our vision was to couple it with another very advanced system, the AOF,” says Roland Bacon, project lead for MUSE. “The discovery potential of MUSE, already large, is now enhanced still further. Our dream is becoming true.”

One of the main science goals of the system is to observe faint objects in the distant Universe with the best possible image quality, which will require exposures of many hours. Joël Vernet, ESO MUSE and GALACSI Project Scientist, comments: “In particular, we are interested in observing the smallest, faintest galaxies at the largest distances. These are galaxies in the making — still in their infancy — and are key to understanding how galaxies form.”

Furthermore, MUSE is not the only instrument that will benefit from the AOF. In the near future, another adaptive optics system called GRAAL will come online with the existing infrared instrument HAWK-I, sharpening its view of the Universe. That will be followed later by the powerful new instrument ERIS.

“ESO is driving the development of these adaptive optics systems, and the AOF is also a pathfinder for ESO’s Extremely Large Telescope,” adds Arsenault. “Working on the AOF has equipped us — scientists, engineers and industry alike — with invaluable experience and expertise that we will now use to overcome the challenges of building the ELT.”

[1] MUSE is an integral-field spectrograph, a powerful instrument that produces a 3D data set of a target object, where each pixel of the image corresponds to a spectrum of the light from the object. This essentially means that the instrument creates thousands of images of the object at the same time, each at a different wavelength of light, capturing a wealth of information.

[3] At just over one metre in diameter, this is the largest adaptive optics mirror ever produced and demanded cutting-edge technology. It was mounted on UT4 in 2016 (ann16078) to replace the telescope’s original conventional secondary mirror.

[4] Other tools to optimise the operation of the AOF have been developed and are now operational. These include an extension of the Astronomical Site Monitor software that monitors the atmosphere to determine the altitude at which the turbulence is occurring, and the Laser Traffic Control System (LTCS) that prevents other telescopes looking into the laser beams or at the artificial stars themselves and potentially affecting their observations. 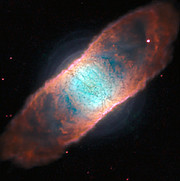 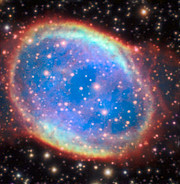 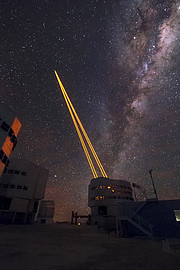 PR kép eso1724g
The powerful lasers of the AOF 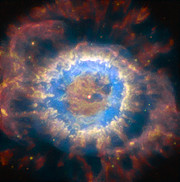 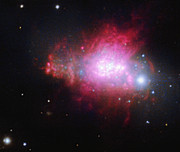