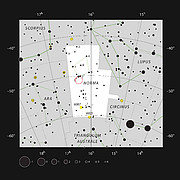 PR videó eso1607a
A close look at the sky around the star formation region RCW 106
Send us your comments!
Subscribe to receive news from ESO in your language
Accelerated by CDN77
Szerződési feltételek