A Celestial Butterfly Emerges from its Dusty Cocoon

Some of the sharpest images ever made with ESO’s Very Large Telescope (VLT) have, for the first time, revealed what appears to be an ageing star giving birth to a butterfly-like planetary nebula. These observations of the red giant star L2 Puppis, from the ZIMPOL mode of the newly installed SPHERE instrument, also clearly showed a close companion. The dying stages of stars continue to pose astronomers with many riddles, and the origin of such bipolar nebulae, with their complex and alluring hourglass figures, doubly so. This new imaging mode means that the VLT is currently the sharpest astronomical direct imaging instrument in existence.

At about 200 light-years away, L2 Puppis is one of the closest red giants to Earth known to be entering its final stages of life. The new observations with the ZIMPOL mode of SPHERE were made in visible light using extreme adaptive optics, which corrects images to a much higher degree than standard adaptive optics, allowing faint objects and structures close to bright sources of light to be seen in greater detail. They are the first published results from this mode and the most detailed of such a star.

ZIMPOL can produce images that are three times sharper than those from the NASA/ESA Hubble Space Telescope, and the new observations show the dust that surrounds L2 Puppis in exquisite detail [1]. They confirm earlier findings, made using NACO, of the dust being arranged in a disc, which from Earth is seen almost completely edge-on, but provide a much more detailed view. The polarisation information from ZIMPOL also allowed the team to construct a three dimensional model of the dust structures [2].

The astronomers found the dust disc to begin about 900 million kilometres from the star — slightly farther than the distance from the Sun to Jupiter — and discovered that it flares outwards, creating a symmetrical, funnel-like shape surrounding the star. The team also observed a second source of light about 300 million kilometres — twice the distance from Earth to the Sun — from L2 Puppis. This very close companion star is likely to be another red giant of slightly lower mass, but less evolved.

The combination of a large amount of dust surrounding a slowly dying star, along with the presence of a companion star, mean that this is exactly the type of system expected to create a bipolar planetary nebula. These three elements seem to be necessary, but a considerable amount of good fortune is also still required if they are to lead to the subsequent emergence of a celestial butterfly from this dusty chrysalis.

Lead author of the paper, Pierre Kervella, explains: “The origin of bipolar planetary nebulae is one of the great classic problems of modern astrophysics, especially the question of how, exactly, stars return their valuable payload of metals back into space — an important process, because it is this material that will be used to produce later generations of planetary systems.”

In addition to L2 Puppis’s flared disc, the team found two cones of material, which rise out perpendicularly to the disc. Importantly, within these cones, they found two long, slowly curving plumes of material. From the origin points of these plumes, the team deduces that one is likely to be the product of the interaction between the material from L2 Puppis and the companions star’s wind and radiation pressure, while the other is likely to have arisen from a collision between the stellar winds from the two stars, or be the result of an accretion disc around the companion star.

Although much is still to be understood, there are two leading theories of bipolar planetary nebulae, both relying on the existence of a binary star system [3]. The new observations suggest that both of these processes are in action around L2 Puppis, making it appear very probable that the pair of stars will, in time, give birth to a butterfly.

Pierre Kervella concludes: “With the companion star orbiting L2 Puppis only every few years, we expect to see how the companion star shapes the red giant’s disc. It will be possible to follow the evolution of the dust features around the star in real time — an extremely rare and exciting prospect.”

[1] SPHERE/ZIMPOL use extreme adaptive optics to create diffraction-limited images, which come a lot closer than previous adaptive optics instruments to achieving the theoretical limit of the telescope if there were no atmosphere. Extreme adaptive optics also allows much fainter objects to be seen very close to a bright star. These images are also taken in visible light — shorter wavelengths than the near-infrared regime, where most earlier adaptive optics imaging was performed. These two factors result in significantly sharper images than earlier VLT images. Even higher spatial resolution has been achieved with VLTI, but the interferometer does not create images directly.

[2] The dust in the disc was very efficient at scattering the stars’ light towards Earth and polarising it, a feature that the team could use to create a three-dimensional map of the envelope using both ZIMPOL and NACO data and a disc model based on the RADMC-3D radiative transfer modeling tool, which uses a given set of parameters for the dust to simulate photons propagating through it.

[3] The first theory is that the dust produced by the primary, dying star’s stellar wind is confined to a ring-like orbit about the star by the stellar winds and radiation pressure produced by the companion star. Any further mass lost from the main star is then funneled, or collimated, by this disc, forcing the material to move outwards in two opposing columns perpendicular to the disc.

The second holds that most of the material being ejected by the dying star is accreted by its nearby companion, which begins to form an accretion disc and a pair of powerful jets. Any remaining material is pushed away by the dying star’s stellar winds, forming an encompassing cloud of gas and dust, as would normally occur in a single star system. The companion star’s newly created bipolar jets, moving with much greater force than the stellar winds of the dying star, then carve dual cavities through the surrounding dust, resulting in the characteristic appearance of a bipolar planetary nebula.

This research was presented in a paper entitled “The dust disk and companion of the nearby AGB star L2 Puppis”, by P. Kervella, et al., to appear in the journal Astronomy & Astrophysics on 10 June 2015. 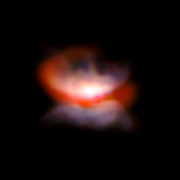 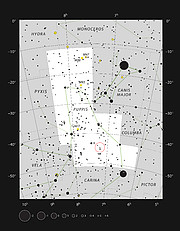 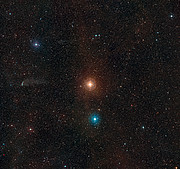