This new image from ALMA, the Atacama Large Millimeter/submillimeter Array, reveals extraordinarily fine detail that has never been seen before in the planet-forming disc around a young star. These are the first observations that have used ALMA in its near-final configuration and the sharpest pictures ever made at submillimetre wavelengths. The new results are an enormous step forward in the observation of how protoplanetary discs develop and how planets form.

For ALMA’s first observations in its new and most powerful mode, researchers pointed the antennas at HL Tauri — a young star, about 450 light-years away, which is surrounded by a dusty disc [1]. The resulting image exceeds all expectations and reveals unexpectedly fine detail in the disc of material left over from star birth. It shows a series of concentric bright rings, separated by gaps [2].

"These features are almost certainly the result of young planet-like bodies that are being formed in the disc. This is surprising since such young stars are not expected to have large planetary bodies capable of producing the structures we see in this image," said Stuartt Corder, ALMA Deputy Director.

“When we first saw this image we were astounded at the spectacular level of detail. HL Tauri is no more than a million years old, yet already its disc appears to be full of forming planets. This one image alone will revolutionise theories of planet formation,” explained Catherine Vlahakis, ALMA Deputy Program Scientist and Lead Program Scientist for the ALMA Long Baseline Campaign.

HL Tauri’s disc appears much more developed than would be expected from the age of the system. Thus, the ALMA image also suggests that the planet-formation process may be faster than previously thought.

Such high resolution can only be achieved with the long baseline capabilities of ALMA and provides astronomers with new information that is impossible to collect with any other facility, even the NASA/ESA Hubble Space Telescope. “The logistics and infrastructure required to place antennas at such distant locations required an unprecedented coordinated effort by an expert international team of engineers and scientists,” said ALMA Director, Pierre Cox. “These long baselines fulfill one of ALMA’s major objectives and mark an impressive technological, scientific and engineering milestone.”

Young stars like HL Tauri are born in clouds of gas and fine dust, in regions which have collapsed under the effects of gravitation, forming dense hot cores that eventually ignite to become young stars. These young stars are initially cocooned in the remaining gas and dust, which eventually settles into a disc, known as a protoplanetary disc.

Through many collisions the dust particles will stick together, growing into clumps the size of sand grains and pebbles. Ultimately, asteroids, comets and even planets can form in the disc. Young planets will disrupt the disc and create rings, gaps and holes such as those seen in the structures now observed by ALMA [3].

The investigation of these protoplanetary discs is essential to our understanding of how Earth formed in the Solar System. Observing the first stages of planet formation around HL Tauri may show us how our own planetary system may have looked more than four billion years ago, when it formed.

“Most of what we know about planet formation today is based on theory. Images with this level of detail have up to now been relegated to computer simulations or artist’s impressions. This high resolution image of HL Tauri demonstrates what ALMA can achieve when it operates in its largest configuration and starts a new era in our exploration of the formation of stars and planets,” says Tim de Zeeuw, Director General of ESO.

[1] Since September 2014 ALMA has been observing the Universe using its longest ever baselines, with antennas separated by up to 15 kilometres. This Long Baseline Campaign will continue until 1 December 2014. The baseline is the distance between two of the antennas in the array. As a comparison, other facilities operating at millimetre wavelengths provide antennas separated by no more than two kilometres. The maximum possible ALMA baseline is 16 kilometres. Future observations at shorter wavelengths will achieve even higher image sharpness.

[2] The structures are seen with a resolution of just five times the distance from the Sun to the Earth. This corresponds to an angular resolution of about 35 milliarcseconds — better than what is routinely achieved with the NASA/ESA Hubble Space Telescope.

[3] In visible light, HL Tauri is hidden behind a massive envelope of dust and gas. ALMA observes at much longer wavelengths, which allows it to study the processes right at the core of this cloud. 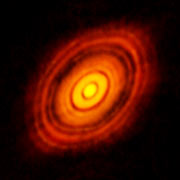 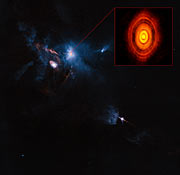 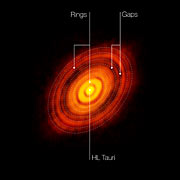 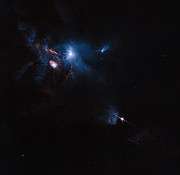 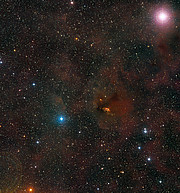 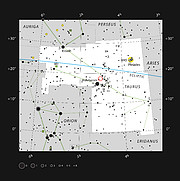 PR kép eso1436h
HL Tauri in the constellation of Taurus

PR videó eso1436b
Zooming in on the location of HL Tauri

PR videó eso1436d
Artist's 3d impression of the disc around the young star HL Tauri
Send us your comments!
Subscribe to receive news from ESO in your language
Accelerated by CDN77
Szerződési feltételek