For decades scientists have believed that galaxy mergers usually result in the formation of elliptical galaxies. Now, for the the first time, researchers using ALMA and a host of other radio telescopes have found direct evidence that merging galaxies can instead form disc galaxies, and that this outcome is in fact quite common. This surprising result could explain why there are so many spiral galaxies like the Milky Way in the Universe.

An international research group led by Junko Ueda, a Japan Society for the Promotion of Science postdoctoral fellow, has made surprising observations that most galaxy collisions in the nearby Universe — within 40–600 million light-years from Earth — result in so-called disc galaxies. Disc galaxies — including spiral galaxies like the Milky Way and lenticular galaxies — are defined by pancake-shaped regions of dust and gas, and are distinct from the category of elliptical galaxies.

It has, for some time, been widely accepted that merging disc galaxies would eventually form an elliptically shaped galaxy. During these violent interactions the galaxies do not only gain mass as they merge or cannibalise each-other, but they are also changing their shape throughout cosmic time, and therefore changing type along the way.

Computer simulations from the 1970s predicted that mergers between two comparable disc galaxies would result in an elliptical galaxy. The simulations predict that most galaxies today are elliptical, clashing with observations that over 70% of galaxies are in fact disc galaxies. However, more recent simulations have suggested that collisions could also form disc galaxies.

To identify the final shapes of galaxies after mergers observationally, the group studied the distribution of gas in 37 galaxies that are in their final stages of merging. The Atacama Large Millimeter/sub-millimeter Array (ALMA) and several other radio telescopes [1] were used to observe emission from carbon monoxide (CO), an indicator of molecular gas.

The team’s research is the largest study of molecular gas in galaxies to date and provides unique insight into how the Milky Way might have formed. Their study revealed that almost all of the mergers show pancake-shaped areas of molecular gas, and hence are disc galaxies in the making. Ueda explains: “For the first time there is observational evidence for merging galaxies that could result in disc galaxies. This is a large and unexpected step towards understanding the mystery of the birth of disc galaxies.”

Nonetheless, there is a lot more to discover. Ueda added: “We have to start focusing on the formation of stars in these gas discs. Furthermore, we need to look farther out in the more distant Universe. We know that the majority of galaxies in the more distant Universe also have discs. We however do not yet know whether galaxy mergers are also responsible for these, or whether they are formed by cold gas gradually falling into the galaxy. Maybe we have found a general mechanism that applies throughout the history of the Universe.” 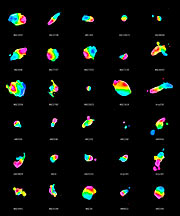