On 4 December 2013, at ESO Headquarters in Garching bei München, Germany, an official inauguration ceremony was held for the new office extension. This celebration was attended by members of the ESO Council, local authorities, the architects Auer+Weber+Assoziierte, the general contractor BAM Deutschland AG and the ESO management team.

The unveiling of the extension marks an important day in ESO’s history as it will not only bring all of ESO’s Garching staff together on one site, facilitating valuable collaborative work, but will also provide a technical building for ESO’s most advanced instruments to be assembled, tested and upgraded. The extension was made possible in part thanks to a generous contribution from the German Federal Ministry for Science and Research.

These two buildings — an office building of 10 300 square metres and a technical building of 2900 square metres — and their surroundings cover more than double the current area of the ESO Garching Headquarters. This additional space was much needed as ESO staff are currently spread across different locations in the Garching campus area.

Furthermore, with the European Extremely Large Telescope on the horizon, ESO needed a cradle for the technological innovations that the ambitious project will require. The technical building — which will also host one of the largest computer archives of astronomical data in the world — will be the focal point of this work.

The two buildings and the bridge that connects them to the current headquarters were designed by architects Auer+Weber+Assoziierte after several plans were proposed as part of an architectural competition. This firm also designed the Residencia at ESO’s Paranal Observatory in Chile, which was a recipient of both a LEAF Award in 2004 and a Cityscape Architectural Review Award in 2005.

The extension has been designed to be in keeping with the original building. The office building, which follows the same curved shape, makes extensive use of natural light sources and has two inner courtyards. The technical building is a cylinder with a diameter almost matching the size of the 39-metre primary mirror of the E-ELT.

Both new buildings have been labelled green buildings as their energy consumption will be significantly lower than is typical for buildings of this size. This is due to the well-insulated façade and because the office building is heated and cooled through concrete core activation — for which groundwater is used together with a heat pump — and supplied with district heating using geothermally heated water.

This extension — the construction of which began in January 2012 — marks one more significant step forward in ESO’s constant evolution.

PR kép eso1350d
A view of the ESO Headquarters Extension 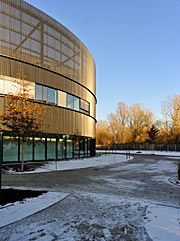 PR kép eso1350i
A view of the ESO Headquarters Extension