PR kép eso1229b
Positions of the telescopes used in the 1.3 mm VLBI observations of the quasar 3C 279 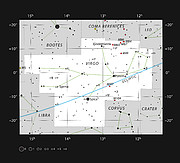 PR videó eso1229b
Positions of the telescopes used in the 1.3 mm VLBI observations of the quasar 3C 279

PR videó eso1229c
Artist’s impression of the quasar 3C 279 (alternative version)
Send us your comments!
Subscribe to receive news from ESO in your language
Accelerated by CDN77
Szerződési feltételek