A new image of Messier 55 from ESO's VISTA infrared survey telescope shows tens of thousands of stars crowded together like a swarm of bees. Besides being packed into a relatively small space, these stars are also among the oldest in the Universe. Astronomers study Messier 55 and other ancient objects like it, called globular clusters, to learn how galaxies evolve and stars age.

Globular clusters are held together in a tight spherical shape by gravity. In Messier 55, the stars certainly do keep close company: approximately one hundred thousand stars are packed within a sphere with a diameter of only about 25 times the distance between the Sun and the nearest star system, Alpha Centauri.

About 160 globular clusters have been spotted encircling our galaxy, the Milky Way, mostly toward its bulging centre. The two latest discoveries, made using VISTA, were recently announced (eso1141). The largest galaxies can have thousands of these rich collections of stars in orbit around them.

Observations of globular clusters' stars reveal that they originated around the same time — more than 10 billion years ago — and from the same cloud of gas. As this formative period was just a few billion years after the Big Bang, nearly all of the gas on hand was the simplest, lightest and most common in the cosmos: hydrogen, along with some helium and much smaller amounts of heavier chemical elements such as oxygen and nitrogen.

Being made mostly from hydrogen distinguishes globular cluster residents from stars born in later eras, like our Sun, that are infused with heavier elements created in earlier generations of stars. The Sun lit up some 4.6 billion years ago, making it only about half as old as the elderly stars in most globular clusters. The chemical makeup of the cloud from which the Sun formed is reflected in the abundances of elements found throughout the Solar System — in asteroids, in the planets and in our own bodies.

Sky watchers can find Messier 55 in the constellation of Sagittarius (The Archer). The notably large cluster appears nearly two-thirds the width of the full Moon, and is not at all difficult to see in a small telescope, even though it is located at a distance of about 17 000 light-years from Earth.

The French astronomer Nicolas Louis de Lacaille first documented the stellar grouping around 1752, and some 26 years later another French astronomer, Charles Messier, included the cluster as the 55th entry in his famous astronomical catalogue. The object is also cross-listed as NGC 6809 in the New General Catalogue, an often-cited and more extensive astronomical catalogue created in the late nineteenth century.

The new image was obtained in infrared light by the 4.1-metre Visible and Infrared Survey Telescope for Astronomy (VISTA, eso0949) at ESO's Paranal Observatory in northern Chile.

As well as the stars of Messier 55, this VISTA image also records many galaxies lying far beyond the cluster. A particularly prominent edge-on spiral galaxy appears to the upper right of the centre of the picture. 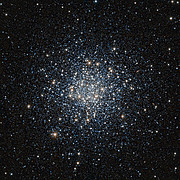 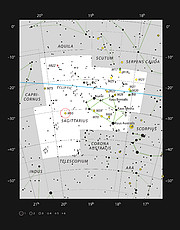 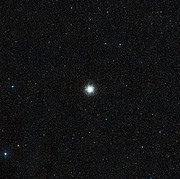 PR videó eso1220b
Panning across VISTA’s infrared image of the globular star cluster Messier 55
Send us your comments!
Subscribe to receive news from ESO in your language
Accelerated by CDN77
Szerződési feltételek