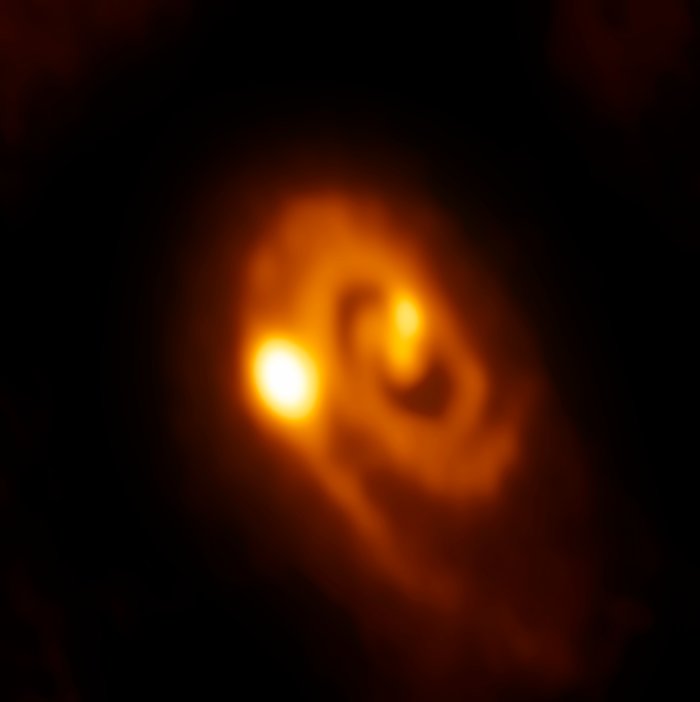 For the first time, astronomers have seen a dusty disc of material around a young star fragmenting into a multiple star system. This image comprises new observations from the Atacama Large Millimeter/submillimeter Array (ALMA), Chile, and reveals the process in action!

Stars form in cosmic clouds of gas and dust, when the thin material in the clouds collapses gravitationally into denser cores that in turn draw additional material inward. The infalling material forms a rotating disc around the young star, and is slowly consumed. Eventually, the young star gathers enough mass to create the necessary temperatures and pressures at its centre to trigger nuclear fusion.

Stars that have no companion — such as the Sun — are not as common as we once thought. In fact, almost half of the stars in our galaxy have at least one companion, and some are more sociable still! Previous studies have indicated that the stars in multiple systems tend to be either relatively close to each other, within about 500 times the Earth-Sun distance (known as an Astronomical Unit or AU), or significantly further apart, at over 1000 AU.

Given these wildly different distances, scientists concluded that there were two main mechanisms producing multiple star systems — either the original cloud collapsed unstably and fragmented, each subsequent fragment crumpling to form a new star, or the rotating disc around an existing star fragmented, with the same result. Systems with larger separations likely formed via the former process (as recent observational studies have suggested), and closer-knit stellar families via the latter (although there was limited evidence of this process).

New data from ALMA have now offered observational evidence of this conclusion. This image shows the second process in action, as seen in the young triple star system L1448 IRS3B. The trio are still deeply embedded within their parent cloud in the constellation of Perseus, some 750 light-years from Earth, and are hungrily feeding from material in the surrounding disc. ALMA has revealed this disc to have a spiral structure, a feature that indicates gravitational instability.