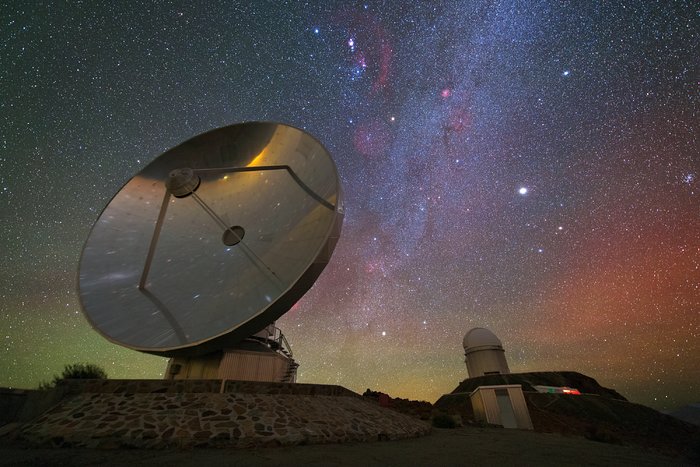 This image shows ESO’s La Silla Observatory perched on the outskirts of the Chilean Atacama Desert and cloaked in an iridescent sky. Deep reddish hues permeate the right side of the frame and give way to the Milky Way, which can be seen with stunning clarity from La Silla, a location boasting some of the darkest and clearest night skies on Earth. The red and greenish-yellow glow is caused by airglow — a glow caused by the Earth’s atmosphere that is usually only seen from space, or at very dark locations.

Hogging the limelight in this frame is the silver dish in the foreground — the Swedish–ESO Submillimetre Telescope (SEST). Although it was decommissioned in 2003 and is no longer in service SEST still provides a picturesque target for keen photographers as it reflects the bright lights and colours of the skies above.

In the background of the image is the rounded dome that houses the ESO 3.6-metre telescope, host to the High Accuracy Radial velocity Planet Searcher instrument (HARPS). HARPS is the world's foremost exoplanet hunter, and has successfully found more low-mass exoplanets than any other planet hunter to date.

This image was taken by ESO Photo Ambassador Yuri Beletsky, who takes astronomical images like these during his spare time while working as an astronomer at ESO’s La Silla Paranal Observatory.